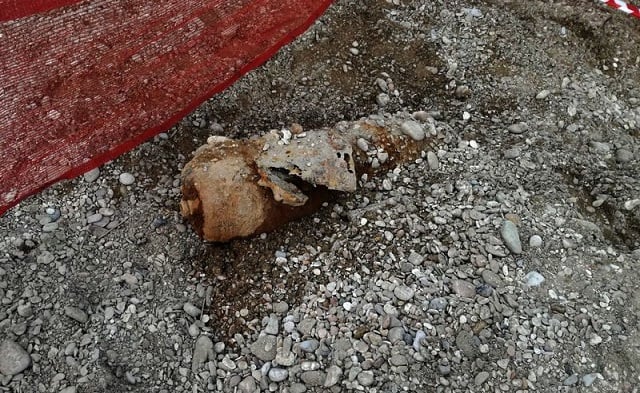 The British-made bomb — loaded with more than 225 kilograms of TNT — was found on Tuesday by workers building a spillway close to the Sassonia beach in Fano, in the Marche region.

Fano's mayor, Massimo Seri, ordered the evacuation of 23,000 residents within a 1.8 kilometre radius of the find, while disposal experts from the Italian navy moved the metre-long device.

Thousands of soldiers were involved in the operation, transporting residents to safety and sharing the news of the evacuation order from vehicles' loudspeakers.

The evacuation order applied to more than one in three residents in the town, primarily those living in its historic centre and southern suburbs, and the town's hospital was also partially evacuated. During the overnight operation, railway and air traffic were suspended around the city, with the airport and sea port closed.

The bomb was successfully transported to the coast at dawn, according to a statement from the mayor, who praised the army and navy's work in a “special and highly risky” operation.

Seri confirmed the town was “out of danger” and said residents could return to their homes, after many had spent the night with relatives or in municipal buildings.

Railway and air traffic also returned to normal on Wednesday morning, however, schools in the affected area were set to remain closed for the day. The evacuation order had initially been in place until 1pm on Wednesday.

As for the bomb, which was taken two miles off the coast, it will remain where it is for 144 hours in case of explosion. After that, army experts will carry out a controlled detonation.

It's not uncommon for unexploded devices from the Second World War to be found in Italy, and navy divers regularly neutralize explosives found in the country's lakes and rivers. Allied forces dropped hundreds of thousands of bombs on Italy during the fighting, and as many as one in three are thought to have failed to detonate.

Bombs from both the First and Second World Wars have also been found in residential buildings, and even dug up by dogs.