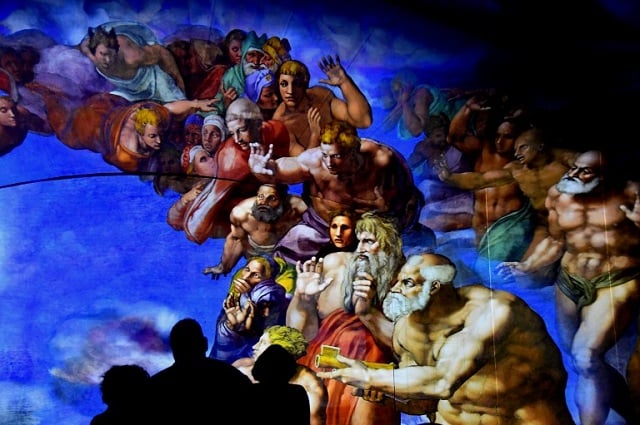 A rehearsal of the show, directed by Marco Balich. Photo: Alberto Pizzoli/AFP

Described as “artainment”, Balich's show, which premiered on Thursday, aims to take a new audience inside the Vatican's Sistine Chapel, one of Rome's most famous sites that is so swamped by camera-clicking tourists it can hardly be fully appreciated.

Balich has taken over Rome's former symphony hall in the hope of giving the art masterpiece back to the people of the eternal city.

“Rome is the only major European capital that doesn't have a permanent show about its own history,” Balich told AFP.

Using the techniques learned during his Olympic experiences he makes audiences feel as if they are sitting in the middle of the iconic chapel. High definition photographs provided by the Vatican Museums are projected onto the stage, walls and ceiling of the hall, which have been covered with canvases. Adam and Eve frolic in front of a close-up of a fresco of the Garden of Eden with plants climbing the walls toward the ceiling, while Noah's Ark heaves in a stormy deluge that soaks actors on stage.

“We've tried to apply the language and technology of the Olympics to a pillar of humanity,” says Balich.

The show starts with blocks of rough marble sliding mysteriously around the stage, before Michelangelo appears revolving around the unhewn rocks, evoking “beauty” until a sculpture emerges from the grey mass.

“Everything is in there,” Balich says. “I seek beauty, the beauty is everything. It is my obsession.”

Next comes Pope Sixtus IV (1471-1484), who had called upon the great artists of his time like Perugino, Botticelli or Ghirlandaio, to paint and restore an old medieval chapel that would eventually be named after him. Then in 1508 Michelangelo is summoned from his hometown of Florence to paint the ceiling of what we now call the Sistine Chapel, at the request of Pope Julius (1471-1484). Just 30 years old and up to that point a sculptor, he recoils at the madness of having to paint one thousand square-metres — 500 hundred days work — despite having no knowledge of fresco painting techniques.

Three decades later and another patron pope, Clement VII (1523-1534), calls him back to the chapel to create his most famous fresco — the Last Judgement.

For the Netflix generation

“I want to talk to younger generations to teach them that beauty and art are an important way of learning about their own roots,” says Balich. “An hour is the attention span of the younger generation, if we tell the story well we can get them interested.”

The grand finale of the show called Universal Judgement: Michelangelo and the Secrets of the Sistine Chapel is a prelude written by Sting, and sung in Latin by the British pop star, along with 16 minutes of narration approved by the Vatican.

Balich refutes any comparison of his show with the spectacular failure last summer of the ambitious rock opera “Divo Nerone”, which was financed by public money but quickly closed in disgrace.

He much prefers to remember the wildly successful “Viaggio nei Fori” sound and light shows, which for the last two years have lit up the Forum of Caesar and the Forum of Augustus and attracted thousands of visitors.

After two and a half years of work and nine million euros ($12 million) of public funding, Balich hopes his gamble pays off by creating something that will last like its subject.