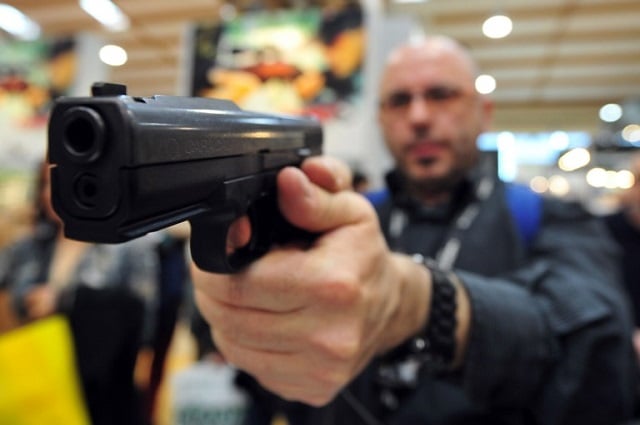 A visitor tries a gun at an outdoor and shooting show in Brescia. File photo: Giuseppe Cacace/AFP

Italian citizens do not have a fundamental right to bear arms, and there are tough laws regulating both ownership and use of guns in the country.

Before buying a gun, you first need to get a gun purchasing licence (Licenza di porto d’armi o Nulla osta) — this is also necessary if you inherit or are given a weapon.

To be eligible, you must be over 18, have a certificate from a shooting range to prove you can safely use the firearm, have a clean criminal record, and state that you are not suffering from mental health or drug addiction problems.

And once you possess a gun, it must be reported to the Interior Ministry within a 72-hour period by going to a police station.

Even with the purchasing licence, there are limits to the number of weapons and amount of ammunitions you can get: a maximum of three ‘common guns’ (this generally applies to handguns, but you can find a full definition here) and 200 handgun cartridges, for example.

Holders of a special Firearms Collectors’ Licence can own a higher number of weapons, but are forbidden from using or moving them and from buying ammunition. In certain cases, they are required to house the weapons in a safe room that meets police specifications. A police officer holds a gun confiscated in a mafia raid across Naples. Photo: Mario Laporta/AFP

Having the purchasing licence doesn’t permit you to carry the gun in public places or to use it; for that, you need another licence.

The concealed carry licence is the hardest of the three to get: you need to prove a valid reason, such as working as a security guard or other at-risk profession, and renew the licence every year rather than every six, as for the other two licences.

There are further limits on the type of guns that are available for civilians to buy, and all military weapons and ammunition are forbidden.

Most police and security officers carry guns, but their use is strictly regulated and authorized only as “an extreme solution”. The accepted scenarios include the need to defend oneself or others from danger to life, and factors such as the immediacy of the threat and proportionality of the response should be taken into account.

It’s impossible to say exactly how many guns are in Italy.

A study by the Small Arms Survey in 2007 reported that between four and ten million firearms were owned in Italy. Despite this uncertainty and the fact it is a decade old, it’s one of few comprehensive studies that takes into account both legal and illegal ownership.

Even when it comes to legally-owned guns, it’s hard to find data on how many guns have been sold or are owned in Italy: the last time national statistics agency Istat published figures on the subject was 2007. However, the number of licences handed out each year is growing.

According to Armi e tiro magazine, in 2016 over 1.26 million gun licences were issued in Italy, including just 18,362 for personal defence. And Interior Ministry data shows that applications for sports licences have risen by more than 40 percent in four years.

But despite strict regulations on gun-owners, several investigations by Italian media, including by Rai, Panorama and La Stampa, have found incidences of people applying for a hunting licence when in reality they want the weapon for self-defence.

Gun deaths remain relatively rare in Italy, but several recent attacks have put the issue of firearm regulation in the spotlight. More than three quarters (76 percent) of Italians think the rate of firearms crime in the country is high, according to a European Commission study.

According to the latest available data from the United Nations Office on Drugs and Crime, there were 0.8 murders committed by firearms in Italy per 100,000 members of the population. That’s a long way off the USA’s figure of 3.8, but still the second highest of the G8 countries.

In another study by the American Journal of Medicine, dating back to 2010, Italy had a rate of 0.3 firearm homicides per 100,000 inhabitants, a rate of 0.9 firearm suicides, and a rate of 0.1 accidental deaths due to firearms. Guns on display at an outdoor and shooting show in Brescia. File photo: Giuseppe Cacace/AFP

A significant proportion of Italy’s gun deaths are cases of domestic violence and/or femicide: the murder of a woman in relation to her gender, usually by a current or former partner.

Guns are the third most common weapon in femicides in Italy, a EURES report showed in 2015, with firearms used in 28 percent of domestic violence murders between 2010 and 2014.

Many other gun deaths are linked to Italy’s organized crime groups, and they’re being carried out by increasingly young perpetrators as the older generation of bosses are arrested or in hiding. In 2016, a 15-year-old in Naples was arrested for the double murder of two other clan members.

Mass shootings are almost unheard of

Though Italy has a higher rate of gun homicides compared to most other G8 countries, mass shootings such as those regularly seen in the US are extremely rare.

In February 2018, the central Italian town of Macerata was rocked by a drive-by shooting in which six people, all of African origin, were injured. The shooter, Luca Traini, owned his weapon legally under a sports licence and had no prior criminal convictions.

Before that, the most recent mass shooting was a 1985 attack on Rome’s Fiumicino airport, in which 16 people were killed and dozens injured when four gunmen fired assault rifles and threw hand grenades at passengers queuing for check-in. Police stand guard outside one of the sites of the Macerata shootings. Photo: AFP

Debate over the right to use guns

One of the main debates on gun ownership in Italy relates to self-defence.

The Northern League, now known as the League, has previously been the most vocal major party in support of citizens’ rights to own guns and use them for self defence.

In 2015, the Northern League mayor of a Piedmont town pledged to give residents €250 towards the purchase of a firearm, saying this would help them “to defend themselves from delinquents”.

Almost a decade earlier in 2006, the party introduced a ‘legitimate defence’ bill permitting the use of knives or guns in order to protect lives or belongings if these were threatened in their home or workplace.

The reform, passed by Italian parliament, applied only if there was danger of aggression and the attacker showed no signs of backing down. In spring 2017 Italy’s upper house of parliament voted to extend the law to include any nighttime break-in, or a robbery attempt involving threats or violence to people or things. This means people would no longer have to prove that they had reason to fear for their lives, though the amendment still needs approval from the Italian Senate to become law.

It was also criticized by the Northern League and Silvio Berlusconi’s Forza Italia as being too watered down; both parties voted against the amendment, arguing that it didn’t sufficiently protect the rights of robbery victims.

Cases in which victims have fatally shot burglars have proved controversial in Italy.

In March 2017, a restaurant owner killed a burglar with a single shot, using a legally-owned hunting rifle. He was investigated for voluntary homicide, a move which sparked an outcry and led rightwing politicians to offer to pay his legal fees, and push for the above amendment to the law.

A study published by Euripses in January this year showed that more than half of Italians felt prepared to use a weapon to defend themselves against an intruder.