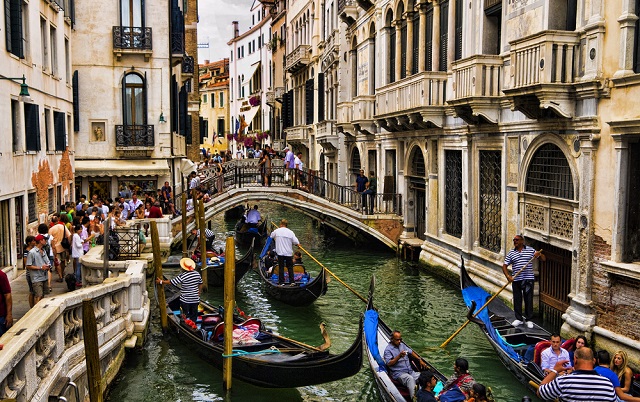 Some 125,000 people visited the city on Easter Sunday and 95,000 on Easter Monday, causing congestion in the city’s narrow alleyways, long queues at popular attractions and frustrating locals.

Venice mayor Luigi Brugnaro has long been accused of failing to come up with a solution to the city’s tourism woes. But he has now suggested charging day-trippers to enter. The idea has been proposed in the past but has never come to fruition.

Brugnaro said he is waiting on a new law proposed by the centre-right coalition which is vying to enter government that would give him more power to limit tourist numbers.

“The solution is obvious: those who live, work or have a place to sleep in the city can enter, the others must stay away,” he said in an interview with Corriere.

“Our priority is to guarantee liveability for residents but also for tourists. Venice is a special city, but many haven’t yet understood this, not even in Rome.

“The mayor must have power to close the city off on crowded days…several ideas have been proposed to the government, we now hope they decide to help Venice.”

In July last year some 2,000 Venetians marched against a tourism industry they argue has destroyed their quality of life and is damaging the environment.

With the city dependent on the lucrative industry for its survival, authorities regularly announce measures to alleviate issues, such as introducing people-counter systems and promoting the lagoon’s lesser-known islands, but nothing has come into force. Brugnaro hailed a move last year that will see giant cruise ships banned from sailing through the middle of Venice from 2022, although some say the plan is unworkable and will have little impact.