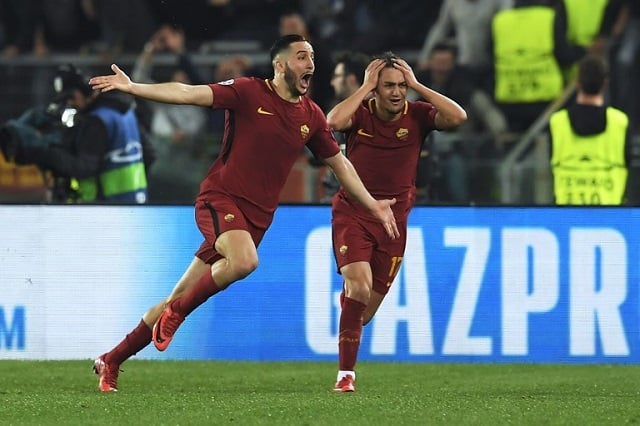 The incredible 3-0 victory at the Stadio Olimpico saw the home side overhaul a 4-1 first-leg defeat and advance on away goals.

READ ALSO: Meet the first North Korean to play in Italy's Serie A

The below message from the AS Roma Twitter account roughly translates as a very enthusiastic “COME ONNNNNNN!”.

The “giallorossi” now advance to the Champions League semi-finals for the first time since 1984, and their fans can start dreaming of the ultimate victory in the final in Kiev in May.

Roma's Edin Dzeko set the ball rolling in the sixth minute, and after Daniele De Rossi converted a penalty 13 minutes after the break to get the home fans believing, Kostas Manolas glanced home a brilliant header with eight minutes left to send the Roma supporters into raptures and leave Barca wondering what had hit them.

If you then you don’t
don’t love deserve
me at my me at my pic.twitter.com/mdFvqsm4oR

With just seven minutes left Manolas met a corner with a unsaveable header, sparking wild celebrations on and off the pitch.

The hosts held on brilliantly to see the result out and go through to the semis for the first time since 1984, when they lost the final at home to Liverpool, Tuesday's other victors.

Scores of fans celebrated in the centre of the Italian capital, including Roma's billionaire Italian-American owner, James Pallotta, who was spotted frolicking in a fountain in Piazza del Popolo fully clothed. He assured the city council he would happily pay the fine for taking his unauthorized dip.

The feel-good factor was picked up on Wednesday by a jubilant Italian press. Several newspapers picked up the pun “Romantada,” a play on the “remontada”, as Barcelona's comeback from a four-goal first-leg deficit against Paris Saint-Germain last year is known in Spain.

“A crazy Olimpico” was the Corriere dello Sport's headline on its main story, which offered a host of reasons why it was a privilege to be at the stadium on Tuesday night, called the players “extraterrestrials” and awarded them all marks of ten out of ten.

Gazzetta dello Sport hailed a “night of dreams,” called Roma's performance “titanic,” praised the team's “aggressiveness” and the tactics of coach Eusebio di Francesco, and pointed out that Roma could now be considered one of “the top four in Europe”.

La Repubblica, a Rome daily, talked of “nights on which the impossible takes shape”.

Another Rome paper, Il Messaggero, ran stories on the “joy of fans” and estimated the semi-final place was worth more than €10 million to Roma.