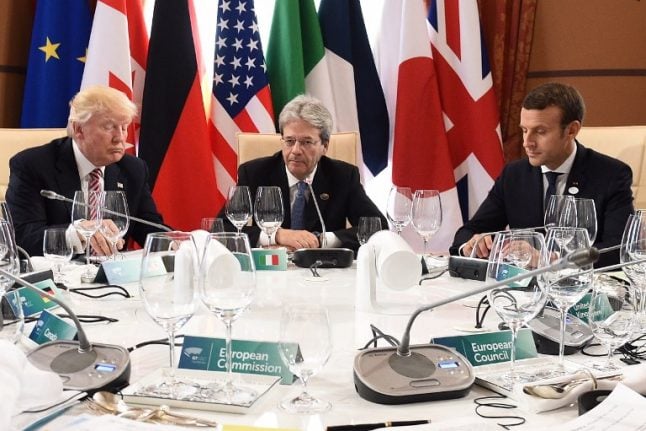 Italy's Prime Minister Paolo Gentiloni alongside the leaders of France and the US, who are carrying out joint strikes on Syria. Photo: Eliot Blondel/Pool/AFP

Bloodshed must be stopped, but not by force alone

In a statement to parliament on Tuesday afternoon, Gentiloni – who remains in place while Italy awaits the formation of a new government – said he accepted international evidence that chemical weapons had been used on Syrian civilians, which he called unacceptable.

“Today after [the attacks in] Douma and Afrin the problem quite simply is to avoid more massacres and bloodshed,” he said.

Yet Italy does not believe that military force alone is the solution.

“We have made clear to our allies that we are opposed to any escalation and that it is impossible to bring the conflict to end only with the use of force and the idea of deposing the dictator [President Bashar al] Assad by military means,” the prime minister said.

Gentiloni stressed the importance of diplomacy, including from Syria's biggest ally, Russia.

“I challenge Russia to contribute to negotiating a solution, alongside the United States, Iran and Europe. Russia's role is fundamental and it need to be played now,” the prime minister said.

Acknowledging that Italy's relations with Russia are warmer than those of many of its European neighbours, Gentiloni admitted that “in recent years some have accused us of being too soft on Russia. But I don't want to repeat the clichés of the Cold War or World War Two. We're contemporaries and we must engage in both firmness and dialogue with Russia.”

Italy is 'a consistent ally of the United States'

Yet Gentiloni was clear who Italy's closest allies are: the US and its other partners in Nato.

“Italy is not a neutral country,” the PM said. “It's not a country that chooses to side with Nato sometimes and other times with Russia. It has always been a consistent ally of the United States, whoever is governing it.”

That said, Gentiloni indicated that Italy wouldn't follow the US blindly but would continue to “signal differences” where necessary.

In this case that means that Italy won't join the US, France and the UK in bombing Syria, nor will it allow American bombing missions to leave from Italian soil, which hosts an estimated 13,000 US soldiers on six military bases.

Italy will, however, continue to provide logistical support, especially from the Nato air base in Aviano, in the north-east.

While Gentiloni insisted that his position represented the cornerstones of Italian foreign policy and not just the outgoing government, those preparing to replace his Democratic Party in power have a different take.

The League, the biggest party in a right-wing coalition that got the largest share of the vote in last's month election, has long shown itself a friend to Russia and President Vladimir Putin. Its leader, Matteo Salvini, has said that bombing Syria won't help and that “the real danger is Islamic terrorism, not the Russians”.

He has also cast doubt on the evidence that Assad used chemical weapons on civilians, pondering on Twitter whether it could be “fake news to unleash more bombs”.

The Five Star Movement (M5S), Italy's single biggest party and similarly pro-Russia in the past, called Salvini's statements “irresponsible” and said Italy should remain close to its established allies, while commending Gentiloni's decision not to take the country into military action.

READ ALSO: US submarine that fired on Syria not welcome in Naples, says mayor