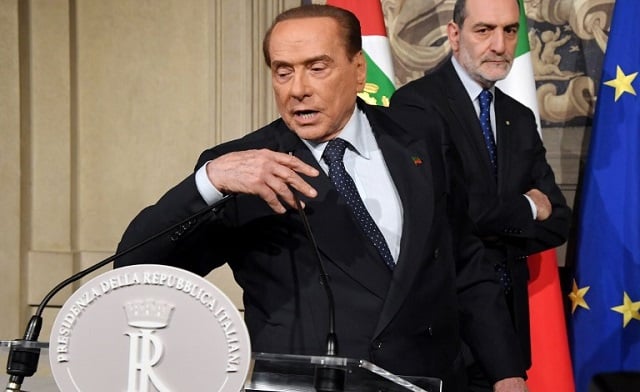 Senate speaker Elisabetta Casellati reported the results of her talks on Friday afternoon after being given an “exploratory mandate” to try to end the political deadlock. Inconclusive elections in March have left the country without a government, and the parties that scooped the highest number of votes have been unable to agree on much.

According to Casellati, however, her talks identified “starting points for political reflection” – though she admitted there was “diversity of opinion” among the parties. Both the Five Star Movement (M5S) and a rightwing coalition performed well in the March vote but failed to achieve a majority or to agree to a grand coalition, while the Democratic Party (PD), which led the last administration, has said it will go into opposition rather than join any coalition.

Silvio Berlusconi, who leads the Forza Italia (FI) party, said on Friday he was “disgusted” by the direction the talks were taking.

“The Italians have voted very badly,” said the former media magnate, whose party was relegated to being the junior ally in the coalition he put together after Matteo Salvini's League won more votes.

Berlusconi's potential role in any government has been one of the biggest stumbling blocks in talks, with the M5S refusing to govern with him and the League unwilling to drop its coalition partner. For his part, the FI leader has also been openly hostile to the M5S.

He did say he would have considered hiring M5S politicians at Mediaset, his broadcasting empire, but only for manual labour. “They're the party of the unemployed. In Mediaset they'd be cleaning the toilets,” he commented, adding that he would prefer to join a coalition with the PD.

Salvini said Berlusconi's comments were “not respectful towards Italians” and that he was “wrong” about the PD, with whom the League has refused to govern.

Despite the fact that no progress has been made, each of the parties has insisted on its keenness to form a government as soon as possible, if only the other parties would stop dragging their feet.

Both Salvini and M5S spokesperson Danilo Toninelli said their parties wanted to avoid a technical government, which could be an option if no grand coalition can be formed.

Italy has now been without a government for 47 days, though there is still some way to go before it reaches the record of 1992, when the country waited 82 days for a new administration.

Italy's president, Sergio Mattarella, said on Friday he would take two days to reflect on Casellati's report before taking any decisions.