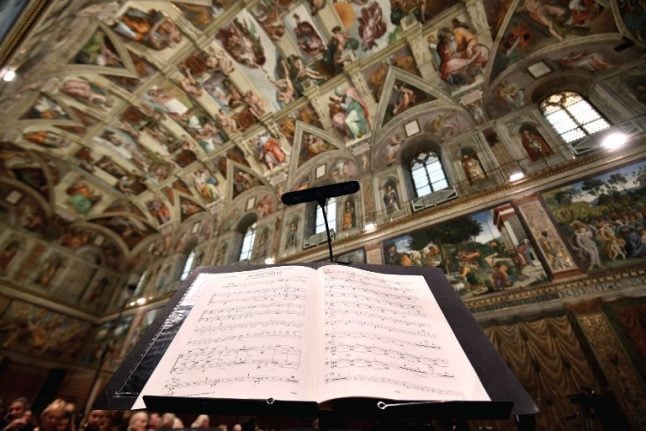 Inside the Sistine Chapel, waiting to play. Photo: Vincenzo Pinto/AFP

It was a performance of Scottish composer James MacMillan's acclaimed version of the Stabat Mater.

A British choir group The Sixteen and chamber orchestra ensemble Britten Sinfonia took to the stage against the backdrop of Michelangelo's masterpiece of The Last Judgement, while lovers of classical music from around the world tuned in to watch on the web.

The Stabat Mater is a 13th century poem most likely written by Franciscan friar Jacopone da Todi (1230-1306), but sometimes ascribed to Pope Innocent III, which portrays the Virgin Mary's suffering during Jesus Christ's death by crucifixion.

MacMillan, 58, who has composed many pieces of sacred music, was commissioned by the Genesis Foundation, which has been working since 2001 to support young artistic talent and develop the link between art and faith.

His version of Stabat Matar was heaped with praise upon its premiere at London's Barbican Centre in 2016, and Cardinal Vincent Nichols, Archbishop of Westminster, pushed for the composer to present his work at the Vatican. Some 300 people filled the Sistine Chapel on Sunday evening for the concert while live video of the performance was streamed over the website of Classic FM.

As the British choir began to sing the audience there and online was reminded that the acoustics as much as the frescoes have made the chapel world famous over the centuries.

The Sistine Chapel attracts some six million visitors each year as part of the Vatican Museum, but it is also “a musical centre where composers have written for the liturgy for hundreds of years, some of the great composers of Western civilisation, Palestrina, Allegri, Josquin… And to have my music played here is a very special priviledge,” said MacMillan.

Conductor Harry Christophers added that “these great sacred places always have something special about the acoustics. The details we can hear, the resonance, is fantastic; it's so emotional.”

And for him the performance at the Sistine Chapel was the chance of a lifetime.

“These occasions, you are lucky if they appear once in a lifetime, and here we are, I can't think of anything greater.”