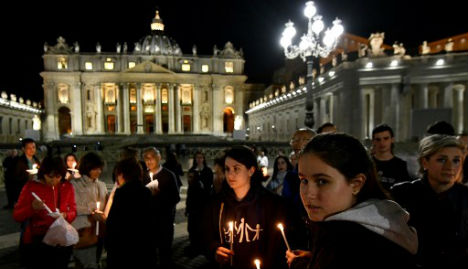 Members of the Italian association Comitato Articolo 26 take part in the Novena vigil prayer, praying for terminally ill British boy Alfie Evans, at the St Peter's square in Vatican. Photo: Alberto Pi
“I am deeply moved by the death of little Alfie. Today I pray especially for his parents, as God the Father receives him in his tender embrace,” the pontiff wrote on his Twitter account.
Evans died on Saturday after doctors withdrew life support. The parents had fought to take their son, who had a degenerative condition that caused irreversible brain damage, out of a hospital in Liverpool in northwest England to a clinic in Rome but lost a final court appeal on Wednesday.
Doctors had already removed life support on Monday after the parents lost a previous appeal to keep him alive.
Pope Francis intervened several times in the case that touched hearts around the world and prompted vigils in Italy and Poland.
Earlier this week the pontiff wrote on Twitter that he hoped the parents' “desire to seek new forms of treatment may be granted”.  “The only master of life, from the beginning to its natural end, is God, and our duty is to do everything to protect life,” he said.
Thomas Evans had also met with the pope in the Vatican last week and asked him to “save our son”.