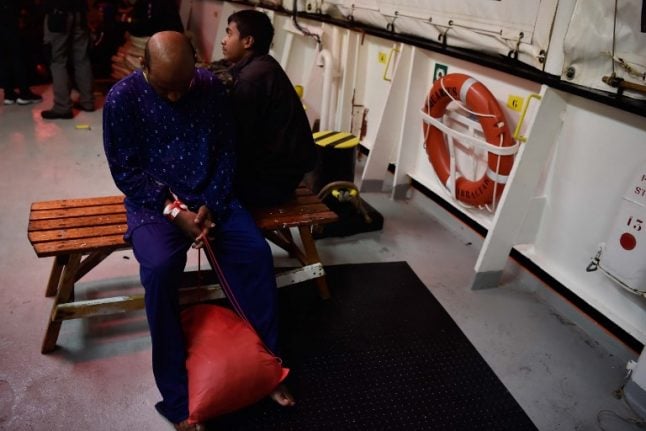 Rome decided on Monday evening to allow 105 migrants to land in Italy following an ordeal that saw them kept at sea while the Italians and British stalled on a decision.

“This is another example of the delays and confusion in coordination that is creating even more risk for lives in the central Mediterranean, already the most deadly maritime area in the world,” said Nick Romaniuk, relief coordinator on rescue ship Aquarius.

The Aquarius is chartered by SOS Mediterranean and Medecins Sans Frontieres and was involved in the weekend's rescue operation.

At dawn on Sunday the Italian coastguard reported a vessel in distress off the coast of Libya to a boat run by NGO Proactiva Open Arms, before then announcing that the Libyan coastguard had taken control of the operation.

When Libya coordinates rescue operations it means that the migrants are taken back to the North African country, where they face a new cycle of detention, violence and extortion.

But according to an Italian MP aboard Proactiva's ship, the Astral, the Libyan coast guard were not there when the Astral met the migrants and didn't respond to radio calls. At that point they decided to take the 105 migrants on board.

Italian politician Riccardo Magi is tweeting from the Astral, where he said people slept on deck and some required medical attention.

During operations coordinated by Rome, the Astral would quickly transfer the people to a larger ship that would take them to Italy. But this time Rome asked London to deal with the migrants because the Astral bears the Union flag.

In the night, London asked the Astral to transfer the migrants to the Aquarius, a larger ship, which flies the (British) flag of Gibraltar.

The two ships met Monday morning about 30 nautical miles off the coast of Tripoli, but waited all day for written confirmation from either London or Rome, the only guarantees that a European port would have been designated for the migrants to disembark.

The UK coast guard told AFP that had been informed of the incident but that “this is not a UK coordinated incident”.

Rome finally authorized the transfer – and therefore a landing in Italy – on Monday evening given the lack of response from London and the need to “protect the health and safety of the 105 migrants,” according to a statement from the Italian Coast Guard.