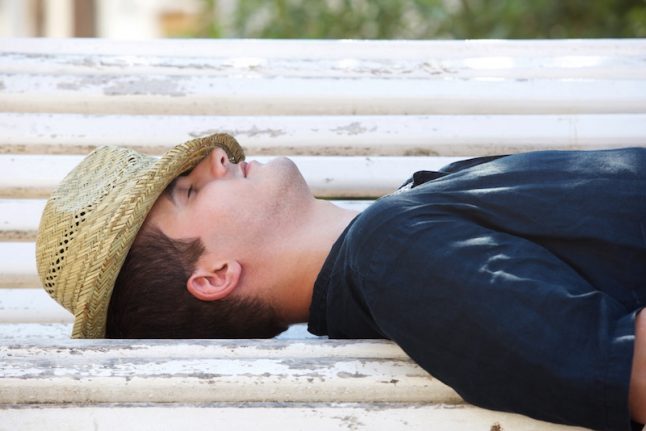 Oh, to meriggiare. Photo: oneinchpunch/Depositphotos
Every language contains certain words or phrases that just can't be translated into a single English word. And Italian is full of examples.

You'll come across some of these words in everyday speech, while others may be used only in, say, poetry or politics.

Here are ten of the most interesting 'untranslatable' Italian words, along with our best shot at a translation.

You know that annoying mark that you get when you put a cold or wet glass down on a table? Well, in Italy it's so bothersome there's a word for it: culaccino.

Derived from culo (“bum”), the same versatile word can also mean the dregs in the glass itself, or the end of a salami or loaf of bread.

You may have heard the phrase “Non me ne frega!” uttered in Italy, meaning “I don't care!”

Well, in Italian there's also a noun to describe someone who's particularly prone to this way of thinking. A “don't give a damn-ite”, if you will. A lady with a moustache. But it's so much more elegant when you can say all that in one word.

“Couch potato” is probably the closest translation for this one, but it doesn't quite capture the humour of this Italian word.

You may know already that pantofole mean slippers in Italian. A pantofolaio is someone who prefers the quiet home life (hence the slippers) and avoids any activity which may disrupt the tranquility of their existence.

This word, popularized by Renaissance man of manners Baldassare Castiglione in his Book of the Courtier, is so untranslatable that you'll sometimes hear it used in English.

The best definition we've got for it is “studied carelessness” or well-faked nonchalance. Castiglione considered it essential to any true gentleman: “I have found quite a universal rule which in this matter seems to me valid above all other,” he wrote, “and in all human affairs whether in word or deed: and that is… to practice in all things a certain sprezzatura, so as to conceal all art and make whatever is done or said appear to be without effort and almost without any thought about it.” In the English-speaking world, people use the French word aperitif to describe an alcoholic drink before a meal. In Italy, it's called an aperitivo. But often you'll find that your pre-dinner tipple comes with free food, too.

In that most glorious of cases, it becomes an apericena – a cross between aperitif and dinner (cena in Italian).

As a pejorative, qualunque can be translated as “whatever”, to indicate indifference. The noun qualunquismo means an attitude of distrust, scepticism and apathy towards politics – something like “meh-ism”.

The word can be traced back to the right-wing populist, monarchist and anti-communist party, the Fronte dell'Uomo Qualunque (Common Man's Front). Formed in 1946 just after the Second World War, the party offered an apolitical alternative to both fascism and anti-fascism.

That chatty nonno at the bottom of your road who's determined to stop you for a half-hour lecture about his zinnias each time you pass by? He's an attaccabottoni.

It means someone who, literally, “attaches your buttons”: the image is of someone keeping you a little too close for a little too long, as if they were repairing the jacket you're wearing. Or, as we'd say in English, buttonholing you.

You'll sometimes see self-help guides advising you how to attaccare bottone (strike up a conversation) with an attractive stranger, but it'll take a certain sprezzatura to make sure you don't come off as a drag. Stemming from the word meriggio (“noon”), this beautiful verb means to rest at midday in a shady spot.

This is a tricky word for English speakers to grasp as it has so many different meanings that don't always directly translate. Typically, it's translated as “even if”, “maybe” or “probably” in a sentence.

But as an exclamation, “magari!” is an expression of a strong desire. For example, if someone asks if you'd like to win first prize in the lottery, you may truthfully say: “magari!”. Although there's no single-word equivalent in English, in this context it means: “If only it were true!”

Which words have we missed? Get in touch on Facebook, Twitter or via email to let us know.