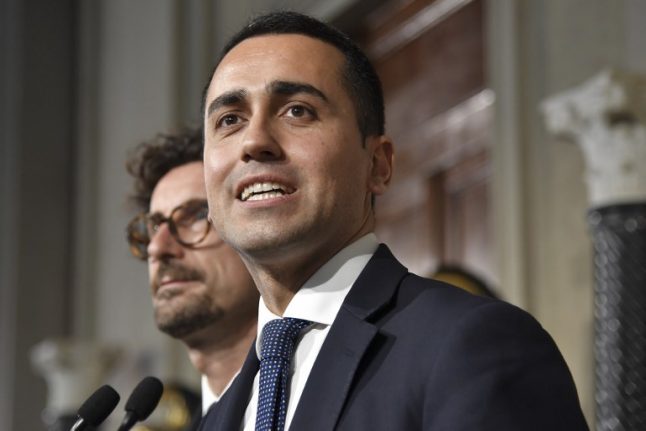 Five Star leader Luigi Di Maio suggested he could be a PM candidate. Photo: ANDREAS SOLARO / AFP
The political deadlock brought about by March's inconclusive elections neared its end after the plan's unveiling by the Five Star Movement (M5S) and the far-right League party.
The programme promises the end of post-crisis austerity measures and seeks deep change in relations with the European Union.
SEE ALSO: Here are the key proposals from the M5S-League government programme
In a Facebook video, Five Star leader Luigi Di Maio said that the programme had received an approval rating of more than 94 percent after it was put to party members for a vote on M5S' online platform.
“Of the 44,796 people who voted, 42,274 voted in favour of the programme, more that 94 percent,” said a beaming Di Maio, who hailed the “outstanding result” as a show of “trust and enthusiasm” for the new programme.
The League will also offer a vote to anyone who visits the party stands which are to be put up across the country over the weekend.
With voter approval little more than a formality, all eyes were on who the two parties will choose as their candidate for prime minister. They need to announce a name in time for a meeting on Monday with President Sergio Mattarella.
Mattarella must agree to the parties' nominee before they can seek parliament's approval for their nascent government.
Both Five Star leader Di Maio and League leader Matteo Salvini remained tight-lipped on who they want as the next prime minister, as they hashed out their 58-page “Contract for the Government of Change”.
On Friday Di Maio suggested that he could be one of the candidates.
“I don't know if I will end up being prime minister, but our real leader, the programme, will govern this country,” he said.
Five Star became Italy's largest party at the March elections, gaining nearly 33 percent of the vote, while the League – shorn of the rest of the rightwing coalition that won 37 percent – will be the junior coalition partner with 17 percent.
No euro exit
While an exit from the single currency – mooted in leaked drafts of the document – is no longer proposed, the document announced the parties' intention to review “with European partners the economic governance framework” of the EU, including the euro.
The parties want a monetary union that is “appropriate for the current geopolitical and economic imbalances and consistent with the objectives of the economic union”, it said.
SEE ALSO: Why economists are worried about Italian populists' government plan
The document featured a number of manifesto promises from the League. These included hardline immigration and security proposals, pension reform and a plan to have just two tax rates, of 15 and 20 percent. The programme proposed that Italy and the EU implement bilateral agreements with other countries in order to speed up the repatriation of illegal
immigrants. The programme also pledges to close all “illegal” Roma camps, set up a register of imams and immediately shut down “radical Islamic associations”.
Berlusconi
The proposals contained in the document have caused consternation at home and abroad. The key worry is how Italy, the eurozone's second most debt-laden country, can fund the coalition's proposals, such as drastic tax cuts and a monthly basic income for some nine million people. Some experts have estimated the cost of the document's proposals at 100 billion euros.
The Grande Oriente freemasons lodge blasted as “fascist” and “unconstitutional” the parties' decision to ban any of their members from becoming a government minister.
Meanwhile on Friday former prime minister Silvio Berlusconi clearly rejected the programme tweeting that his party would act as a “reasonable and scrutinising opposition” to an M5S-League government.
The flamboyant media tycoon also took the opportunity to propose himself as the leader of a separate executive given “the lack of candidates with the qualities of trustworthiness, good sense and balance”.
Berlusconi campaigned alongside Salvini before the election as part of a right-wing coalition. The 81-year-old, recently ordered to stand trial for bribing witnesses in a  sex scandal, said that he was “very worried” about the “sermonising” content of the programme.
It proposes that no-one convicted of corruption or being investigated for serious crimes can become a minister. Conflict of interest criteria for parliamentarians would also be beefed up.
The media mogul, in the Aosta Valley with his Forza Italia party for Sunday's regional elections, said: “I'm available, and I don't think that there's any candidate comparable to Silvio Berlusconi”.
By AFP's Terry Daley