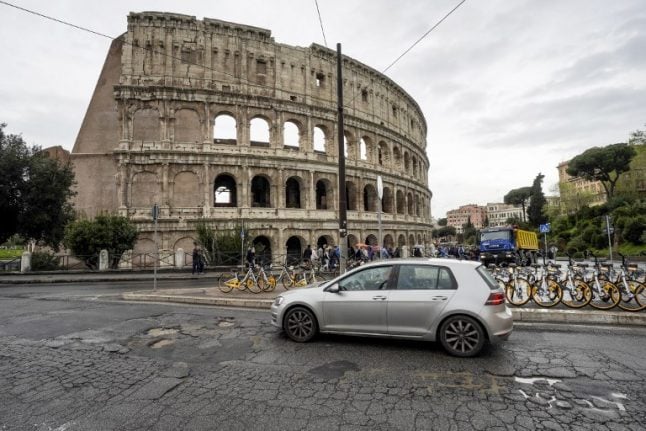 If all roads leads to Rome, they probably have holes in them. Photo: Andreas Solaro/AFP

More people travel by car or scooter in Italy's capital than in any other city that the environmental organization looked at, contributing to long traffic delays and poor air quality. Some 65 percent of all trips in Rome are made by personal motorized transport, compared to 37 percent in much larger London, 30 percent in Berlin or just under 16 percent in Paris.

Meanwhile fewer people cycle in Rome than anywhere else, according to the report: just 1 percent of trips were made by bike, in contrast to a whopping 32 percent in Amsterdam. And just 6 percent of journeys are made on foot in Rome, lower than anywhere else except Moscow (3 percent).

Public transport accounts for 29 percent of journeys, which though comparable to the figure in Berlin or Brussels is far outweighed in Rome by the number of people relying on their own vehicles. While Greenpeace praised the affordability of Rome's public transport – on which a single journey costs just €1.50 – it pointed out that an hour's parking is even cheaper, not to mention the fact that the city's network of metro lines, buses and trams is neither extensive nor reliable.


The share of each type of transport by city. Source: Ranking of European Cities in Sustainable Transport, Greenpeace.

The result is that Rome's roads are more congested, dirtier and more dangerous. Traffic adds an extra 40 percent travel time to Romans' journeys, Greenpeace calculates, while the city is over World Health Organization guidelines for safe levels of air pollution and risks serious damage to its inhabitants' health and its historic buildings.

Greenpeace recommends expanding Rome's network of bike paths (currently at just 100, despite new bicycle share schemes and vast swathes of underutilized green space), as well as introducing a congestion charge similar to that already place in Milan, where drivers are charged €5 for access to the city centre on weekdays.

Such suggestions will probably sound like pie in the sky to Romans, who are accustomed to decades of daily transport woes from buses that burst into flame to sinkholes that spontaneously swallow cars, potholes you can sprain an ankle in and loose cobblestones that have burst many a bicycle tyre.

Rome is currently in the process of drawing up a sustainable urban mobility plan, though for now it remains at the consultation stage.

Any proposals will face a struggle for funding; the cash-strapped capital already strains to pay for public services such as collecting rubbish and mowing park lawns.

In a separate survey out this week, the European Commission found that residents of Rome complain that their city is dirty more than in any other EU capital. Just 9 percent of Romans described themselves as satisfied with the city's cleanliness in 2015, compared to 95 percent of residents in spotless Luxembourg, 69 percent in Copenhagen, 49 percent in Paris and 38 percent in Madrid.