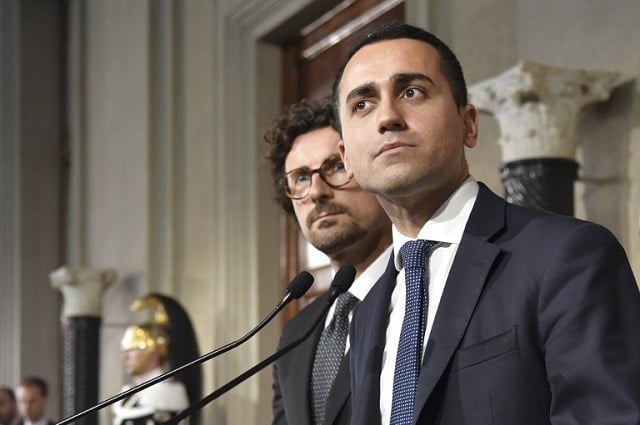 Their first attempt at a government deal collapsed at the weekend after the president signed off on everything but the chosen finance minister, eurosceptic Paolo Savona.

President Sergio Mattarella's refusal to accept the nomination prompted strong reactions from both the parties. M5S leader Luigi Di Maio accused Mattarella's team of lying about Savona's views, and said an impeachment trial for the president was “almost a certainty”. The League's chief Matteo Salvini did not back these calls, instead calling for elections “as soon as possible”.

On Wednesday, Di Maio apologized for the impeachment threat, and instead suggested a compromise over Savona's role.

“Let's find someone of the same character and freedom as the excellent Savona, and Professor Savona remains in the cabinet, in another role as minister,” Di Maio said in a Facebook Live video.

Presidential sources said this proposal was being evaluated “with great attention”.

This puts a populist, political government back on the table, if an agreement can be reached with Salvini — who has called for a return to the polls “as soon as possible”, while support for his party soars in opinion polls.

The League leader had earlier rebuffed the suggestion of a second government bid with the M5S, saying on Tuesday: “I spent weeks in Rome trying to form a government. It was a futile effort.”

On Wednesday, however, Salvini agreed to meet Di Maio for fresh talks, though he said that he wanted “the same team” as before. He skipped a party rally on Thursday to take part in the negotiations in Rome. They were joined later on Thursday by Giuseppe Conte, the populist pick for PM who on Sunday gave up his mandate.

Meanwhile, the leader of smaller far-right party Brothers of Italy, Giorgia Meloni, was also expected to attend, having earlier offered her support to a M5S-League government. There is speculation that the Five Star Movement isn't keen to include her party, which ran alongside the League as part of a right-wing alliance in the March election, in a possible government, though in public the M5S says that it's open to all options.

The prospect of a political government has put plans for a technocratic cabinet on hold.

After the fallout over Savona, president Mattarella gave an ex-IMF director, Carlo Cottarelli, a mandate as caretaker PM. Cottarelli has delayed announcing a cabinet, which in any case would almost certainly fail a parliamentary vote of confidence since the M5S and League have both said they would vote against it.

The uncertainty over Italy's situation has led Moody's to put several Italian banks and companies on negative ratings watch, after already placing Italy's Baa2 rating on review for a possible downgrade over the chaos.

But on social media, Italians were responding to the chaos with jokes and memes.

Under the hashtag '#scusepernonfareilgoverno' (excuses for not making a government), tweeters suggested their own reasons for the lack of progress. The suggested reasons ranged from “unfortunately I've been accepted to Hogwarts” to “we've updated our privacy policy” as the hashtag trended in Italy.

More than half of ordinary Italians – 54 percent – say they are “worried” about the political situation, according to a survey conducted on Tuesday and Wednesday by the Demopolis Institute. Thirty percent are “angry” and 11 percent “disappointed”, with only five percent “confident”, the poll found.