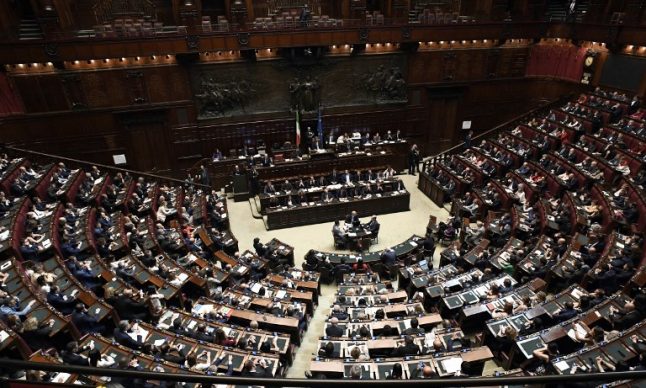 The alliance between the anti-establishment Five Star Movement and the far-right League gained the chamber's endorsement with 350 votes in favour, 236 against and 35 abstentions, following senate approval for prime minister Giuseppe Conte's government on Tuesday.

Victory in the two houses, considered a given ever since the government was sworn in by the president on Friday, gives 53-year-old Conte the mandate to carry out their programme for a “government of change”.

Conte's first task after winning the confidence of parliament is to travel to the G7 summit in Canada, where he will make his debut in international politics barely a fortnight after arriving on the domestic scene.

“In the G7, the first thing for Italy will be to make itself known, the second to make sure that it is respected,” Conte said to reporters on Wednesday. A lawyer with little political experience, Conte was nominated by League leader Matteo Salvini and Five Star head Luigi Di Maio, both of whom are now his deputy prime ministers.

His government's programme – which combines radical tax cuts with anti-austerity measures like a basic monthly income for the poorest citizens – has left many Italian and international observers perplexed given the country's huge public debt.

Italy is groaning under a €2.3 trillion debt which is 132 percent of its gross domestic product, the second highest ratio in the eurozone after Greece.

“We will get through the summer without difficulties, but there will be problems in the autumn if the new government implements just 50 percent of what it has planned,” head of the European Stability Mechanism (ESM) Klaus Regling said on Wednesday.

Conte did not give details in his policy speeches to the senate and chamber on how pledges that could cost billions of euros will be financed. Meanwhile he also reiterated his government's desire to introduce income tax bands of 15 and 20 percent but gave no date as to when they would be implemented.

The programme was strongly criticized in the chamber's pre-vote debate by the League's right-wing campaign allies Forza Italia and Brothers of Italy, and in particular by the centre-left Democratic Party (PD). All three parties wondered where the funding coverage was for the government's ambitious ideas, scoffing at its plans to reduce the debt with economic growth, while the PD's chief whip Graziano Delrio also lambasted Five Star for the programme's hardline on immigration.

In the Senate on Tuesday Conte called for “obligatory” redistribution of asylum seekers around the EU, and the coalition's promises to curb migrant arrivals and speed up expulsions of illegal immigrants are mirror the election promises of Salvini's nationalist League.

Conte's promise to promote a review of sanctions against Russia also echo Salvini's insistence on a softening of relations with the country and its president Vladimir Putin.

On Wednesday, new interior minister Matteo Salvini went a step further, saying that he wanted to open more detention centres for the repatriation of migrants so they “aren't strolling about our cities”.

Salvini has wasted no time creating controversy since being sworn in on Friday, saying at the weekend that Italy “cannot be Europe's refugee camp” on a visit to Sicily, one of the country's main refugee landing points.

He also caused a diplomatic incident with Tunisia after accusing the North African country of exporting “convicts”, leading to Tunisia expressing “deep surprise” in light of the two countries' “cooperation in the fight against illegal immigration”.

Salvini capped off an eventful few days by getting into a spat with Italian international footballer Mario Balotelli. In an interview, Balotelli – whose parents are Ghanaian immigrants – lamented that he was not granted Italian citizenship until the age of 18 despite being born and raised in Italy.

“I'm not a politician, but I think the law should change,” he said Tuesday.

Taking to Twitter the new interior minister wrote: “Dear Mario, 'Ius Soli' [birthright citizenship] is not my priority, nor
the priority of the Italians. Regards, and have fun chasing the ball.”