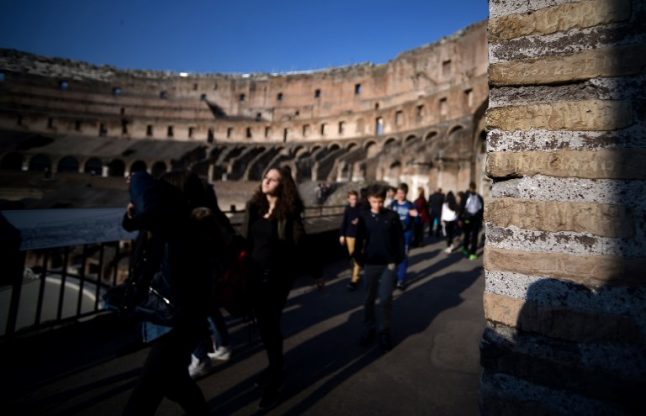 Tourists at the Colosseum, whose ancient brickwork has suffered repeated vandalism over the centuries. Photo: Filippo Monteforte/AFP

The tourist, aged 17, was spotted detaching a fragment from one of the Roman amphitheatre's outer columns, before attempting to conceal it in his backpack.

Carabinieri officers intercepted him and reported him on the spot for “unlawful appropriation of cultural assets belonging to the state”, according to Roma Today.

It's unclear what will happen to him now, but in the past other (adult) tourists have faced fines of several thousand euros for damaging the Colosseum. The charge of defacing Italy's cultural heritage or landscape is punishable by up to five years in prison.

The Austrian was one of several people stopped by carabinieri as part of a crackdown on illegal activities around Rome's most famous ancient monument. Officers also fined 27 unauthorized street vendors a total of more than €150,000 and seized their wares, which included over 700 selfie sticks, portable chargers, hats, tour bus tickets and bottles of water.

Another five vendors were put under police orders banning them from returning to the area after they were discovered selling goods inside the Colosseo metro station, impeding access.

The Colosseum's new director has promised to clear the “souk” that surrounds the monument, saying that she wants to “give the impression to those coming to Italy that it is a civilized country”.

Summer sees a boom in both the tourists flocking to Italy and the people trying to profit from them. Police regularly target the street hawkers who station themselves outside attractions and try to sell visitors everything from roses to fake handbags, while extra guards are deployed during the peak season to keep an eye out for tourists who misbehave.

In the past four years, at least 20 people have been charged with vandalizing the Colosseum and ten with trespassing on it.

READ ALSO: For the first time in decades, the Colosseum opens its top levels to the public