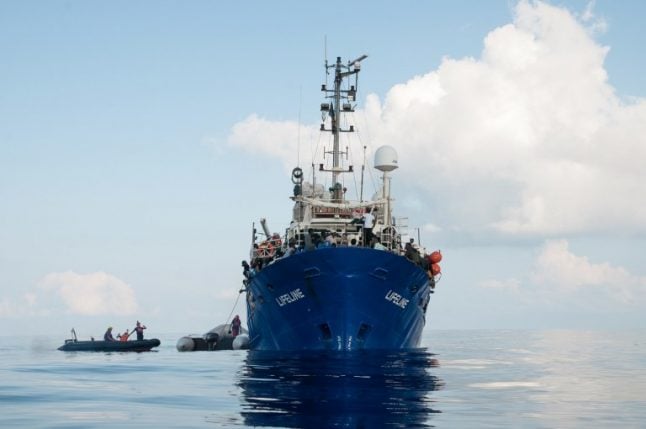 A handout photo from the German NGO 'Mission Lifeline' shows migrants onboard the Lifeline sea rescue boat at sea on Thursday. Photo: Hermine Poschmann / Mission Lifeline / AFP
After Salvini wrote on Facebook about the non-government organisation's cargo of “human flesh”, the NGO responded: “Dear Matteo Salvini, we have no meat on board, but humans.”
“We cordially invite you to convince yourself that it is people we have saved from drowning. Come here, you are welcome!” said the charity's reply.
The Lifeline rescue vessel Sunday remained in limbo west of Malta, with 239 people aboard, including 14 women and four infants, who were rescued near the Libyan coast, said the group.
They had received food and water from Malta, and medical supplies and blankets provided by two other German rescue ships, the Sea-Eye and Sea-Watch, said Mission Lifeline spokesman Axel Steier.
Lifeline said it was also hoping to rendezvous in the waters off Malta with Danish container ship Alexander Maersk, which had rescued 113 migrants off southern Italy.
The larger cargo ship could provide some protection to the smaller Lifeline in case of bad weather, while the rescue ship could help with its on-board medical facilities, he said.
Salvini two weeks ago turned back another rescue vessel, the Aquarius of French group SOS Mediterranee, which eventually docked in Spain. The move sparked protests from France and other EU countries and deepened ruptures in the bloc on the flashpoint issue of immigration.
As 16 EU countries were to meet on the issue at a mini-summit in Brussels on Sunday, the German charity expressed hope other European countries may help out.
Steier hoped for “positive signals” from the meeting and said “our hope is that (EU) states offer to take in the people, in solidarity with the concerns of Italy”.