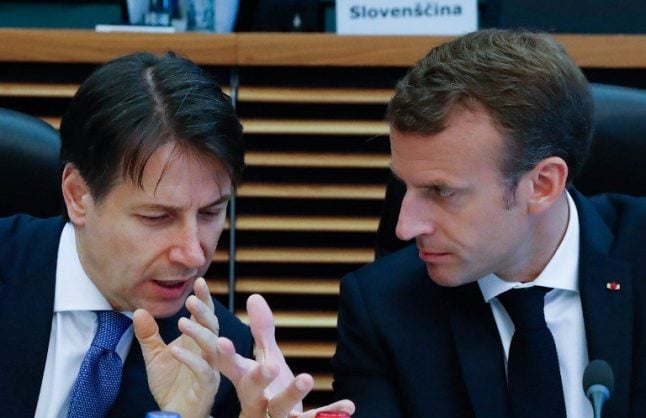 Italy on Sunday called for migrant “protection centres” to be set up in several EU countries to relieve overcrowding in its facilities and demanded more aid for African countries that fight human trafficking.

Italy's hardline new government, which has rejected two migrant boats in the past two weeks, complains that Rome has been left alone to rescue tens of thousands of migrants each year in the Mediterranean and process their asylum requests.

In a ten-point plan presented to EU leaders meeting in Brussels on Sunday, Rome proposed greater burden sharing. “Whoever lands in Italy lands in Europe…..Schengen is at risk,” says the document seen by AFP, referring to Europe's passport-free zone.

It said the EU's priority should be stemming the influx of migrants into the bloc, not regulating the “secondary” movement of migrants across the EU's borders.

French President Emmanuel Macron and German Chancellor Angela Merkel take a different view. Noting that migrant landings in Italy have fallen dramatically this year, Macron said Sunday the main issue was how to distribute asylum-seekers around the union.

Italy said the EU's so-called Dublin rule, whereby asylum seekers are processed in the EU country of arrival, was no longer fit for purpose. “The rescue obligation cannot become an obligation to process applications
on behalf of all,” it said.

“Italy and Spain cannot take everyone. Protection centres are needed in several European countries to safeguard the rights of those arriving and to avoid problems of public order and overcrowding,” it added.

Italy, the main landing point for migrants this year, ahead of Greece and Spain, also called for “protection centres” in migrant transit countries in Africa.

Rome also backed calls by France and Spain for EU members that do not accept refugee quotas to face “financial sanctions” — referring to Hungary, Poland and other central European countries.

Italy's new proposal, titled European Multilevel Strategy for Migration, would lead away from an “emergency approach” to a more “structural” system, said Italy's PM Giuseppe Conte at the meeting.

READ MORE: Italy will 'dare to say no' to EU on migrants: Matteo Salvini