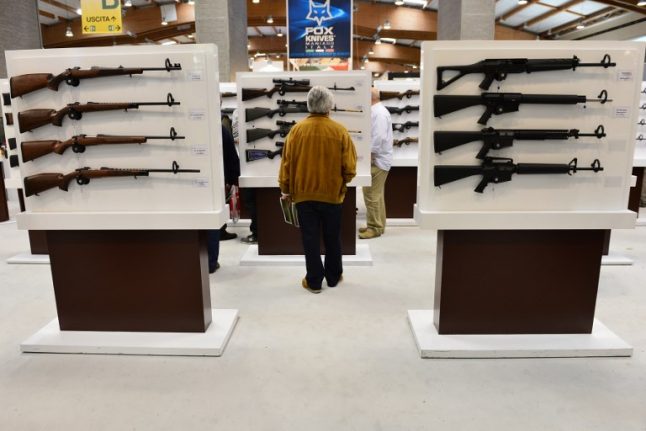 Displays at a gun fair in Brescia. Photo: Giuseppe Cacace/AFP

While 26 percent of people questioned in 2015 said they supported looser laws on owning a gun for self-defence, the latest research carried out by social studies institute Censis and private security sector organization Federsicurezza found that 39 percent were in favour.

The percentage was highest among people with a low level of education and the elderly, rising to 51 percent among respondents who hadn't completed high school and 41 percent for the over-65s.

The study also found that the number of Italians with guns is rising: there were a total of 1,398,920 gun permits in Italy in 2017, an increase of nearly 14 percent in the last year. Factoring in specialist licences for trap shooting and other sports, the authors estimate that some 4.5 million Italians have a gun in the house.

Currently, Italy's rigorous gun laws require anyone who wants to buy a gun to be over 18, have a clean criminal record, get certified by a shooting range and attest that they don't have mental health or addiction problems. Once purchased, guns must be reported to a police station and you need an extra permit to carry one in public. The hard-right League party has long advocated for changes in the law to protect people using weapons, including firearms, in the name of self-defence. Now the junior partner in Italy's governing coalition, the party has proposed that individuals should be allowed to shoot anyone who enters their home, even in the absence of a clear physical threat.

Responding to the survey findings on Wednesday, party leader Matteo Salvini, who is Italy's interior minister and deputy prime minister, said that “A new law giving decent people the right to legitimate defence in their own homes is one of our priorities”.

The study pointed to fears over crime as possible factor in changing attitudes to guns. Around one in three Italians believe they live in an area at risk of crime, according to figures released this month by national statistics office Istat, an increase of nearly 12 percent from the last survey carried out in 2008-9. Nearly 28 percent said they didn't feel safe going out alone in the dark, while 38 percent said that concern about crime affected the way they lived their lives.

This is despite the fact that crime is decreasing, according to the figures gathered by Censis. Some 2.2 million crimes were reported in Italy last year, a decline of 10 percent on the year prior. Murders have decreased by 43 percent since 2008 and robberies by 38 percent.

Perceptions may be skewed by the concentration of crime in Italy's biggest cities, however, with 30 percent of all offences committed in Milan, Rome, Turin and Naples alone.