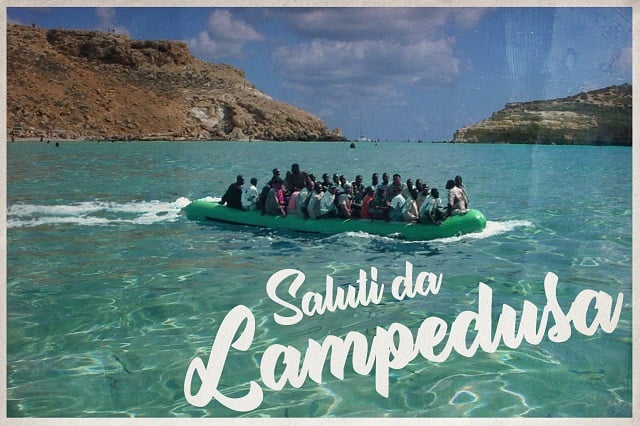 'Greetings from Lampedusa': One of the postcards used in the campaign. Image: Solo in Cartolina

Salvini has clamped down on ships that bring migrants rescued at sea to Italian ports, and said charity-run boats would “only see Italy in postcards”.

In response, a group of artists launched the 'only in postcards' campaign with the goal of raising awareness about migrant deaths at sea and the work of rescuers. The young creatives plan to send 10,000 postcards to the interior ministry and have called on artists and illustrators to submit their own designs.

“Rescuing those who risk dying at sea is a priority and a duty, regardless of political position. Hindering rescue operations is a human rights violation that can not be ignored,” the campaigners said in a statement.

Typical cheery postcard graphics and messages, such as 'Saluti da Pozzallo' (greetings from Pozzallo) and 'Wish you were here' accompany images of migrants aboard flimsy dinghies or other reminders of the treacherous journey. The cards have been designed in different styles, from vintage-style graphics with crosses representing the graves of those who die at sea, to photographs of crowded boats and children in life jackets.

All the postcards uploaded to the site will be printed and sent to Rome's Palazzo del Viminale (the seat of the Prime Minister and Interior Ministry), each with the campaign's logo: a postmark design incorporating waves and a life jacket.

Salvini, who has used the Trump-inspired slogan 'Italians first' as his rallying cry, has announced that Italian ports would be closed all summer to NGO ships carrying rescued migrants. Italy's coalition government, made up of the League and Five Star Movement, has set a goal of zero migrant arrivals by sea.

Italy has called on its EU neighbours to share the migration burden by accepting some of those rescued, and on Sunday 450 rescued migrants disembarked at a Sicilian port following offers from five other countries to take in 50 people each. The interior ministry has also prevented a private Italian ship from docking with migrants on board.

Salvini said the “next objective” would be to send all rescued migrants back to Libya and on Monday morning called for Europe to recognize Libya as a safe port for migrants.

NGOs however have highlighted reports of abuse and rape in Libyan holding centres, and rights group Amnesty International has accused European governments of being “complicit” in this abuse.