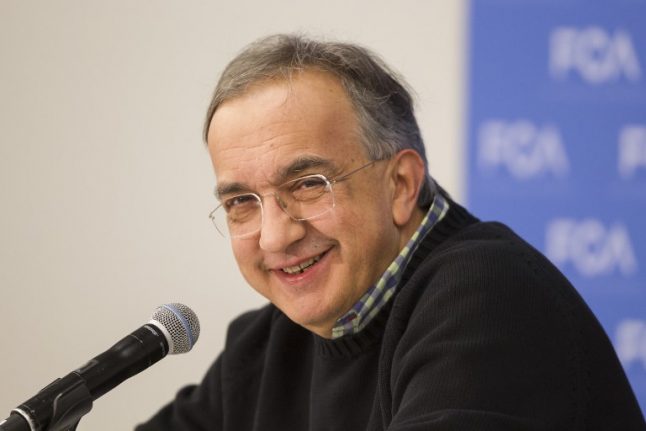 During his 14 years at the helm, Sergio Marchionne is credited with revamping the Fiat company and bringing it back from the brink of bankruptcy.

“It is with the deepest sadness that Exor has learned of the passing of Sergio Marchionne,” Exor, which is owned by the Agnelli family, said in a statement.

Its CEO, John Elkann, said: “Unfortunately, what we feared has come to pass. Sergio Marchionne, man and friend, is gone.”

Fiat had announced at the weekend that Marchionne, 66, was gravely ill in hospital in Zurich after suffering serious complications following surgery on his right shoulder last month.

Marchionne, who brought Fiat back from the brink of bankruptcy, has been lauded by the Italian press since his serious condition was made known over the weekend.

During his 14 years at the helm, Marchionne is credited with revamping Fiat, Italy's premier private enterprise, and bringing it  back from the brink of bankruptcy.

In an indication of the profound impact that Marchionne had in Italy, members of parliament held a minute of silence in his honour, followed by applause.

Italy's deputy Prime Minister Matteo Salvini said “Respect to a man who has done so much and could have done so much more.”

Marchionne will be replaced as FCA boss by Briton Mike Manley, head of the iconic Jeep brand.

The new executive head of Ferrari will be Louis Carey Camilleri, CEO of tobacco giant Philip Morris. The cigarette-maker has sponsored Ferrari for four decades.

Suzanne Heywood will take over as the new boss of CNH Industrial, which specialises in agricultural and construction equipment, trucks and buses.

Marchionne had been planning to step down from FCA next year.

Some experts have cast doubt on the ability of Marchionne's successors to maintain the momentum he had built up over the years. German auto expert Ferdinand Dudenhoeffer described Fiat Chrysler as “a weak company, and now with Marchionne's departure, it has become even weaker.”

His successor at the helm of the sprawling FCA, Manley, “is no Marchionne,” Dudenhoeffer said.

The company's share prices plunged by more than ten percent on the Borsa stock exchange, after it reported a disappointing 35 percent loss of net profit from April to June this year.