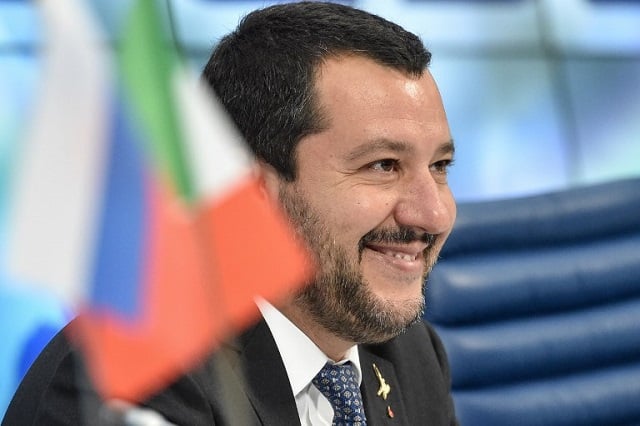 “Vade Retro Salvini,” (Go back, Salvini) read the headline in the Famiglia Cristiana magazine, in a play on the Medieval Catholic phrase used to repel evil “Vade Retro Satana” (Go back Satan).

“The bishops' conference, individual bishops, religious groups: the Church is reacting to the aggressive tone of the Interior Minister,” the publication said.

“Nothing personal or ideological, it is just the Gospel,” it added.

The unflattering association immediately drew the ire of Salvini. The minister and leader of Italy's far-right League party who was often seen carrying a rosary or a bible on the campaign trail took to social media to denounce the paper.

“Famiglia Cristiana even likens me to Satan, he wrote. “I do not pretend to lecture anyone, I am not a perfect Christian, but I do not think I deserve that. I am comforted by the fact that I receive the support every day of so many men and women of the church,” he added.

Since coming to power in June Salvini has taken a hardline stance on migrants and controversially closed the country's ports to migrants rescued at sea. While it has proved very popular among Italians — according to about half a dozen separate polls some two-thirds of citizens approve his decision to close the ports — prominent Catholic figures have spoken out.

Two weeks ago, some priests and nuns protested against his policies in front of the Chamber of Deputies. And after two bodies were discovered in a deflated dinghy off Libya last week, the Episcopal Conference of Italy released a statement denouncing a “tragedy which we cannot manage getting used to”.

“We warn unequivocally that to save our humanity from vulgarity and barbarism, we must protect life. Every life,” the bishops wrote.

On Sunday, Pope Francis also touched on the recent shipwrecks off Libya and launched a new appeal to the international community to “guarantee security, respect for the rights and dignity of all”.

In response, Salvini cited article 2241 of the Catholic church's catechism on Twitter: “The more prosperous nations are obliged, TO THE EXTENT THEY ARE ABLE, to welcome the foreigner,” he wrote.