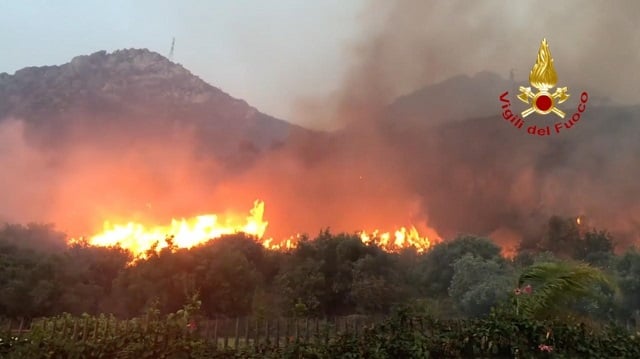 A wildfire in Sicily on Tuesday. Photo: Italian fire service

Two levels of alert — yellow (meaning a 'medium level of danger') and the more serious orange ('high' level of danger) — were in place in Sardinia on Thursday. The orange alert issued by the Department of Civil Protection applied to the Campidano and Goceano areas between Oristano and Cagliari.

Firefighters have battled a series of wildfires across Sardinia and Sicily in recent days.

In Sardinia, firefighters on the ground and helicopters have worked to battle the flames in Escalaplano in the south, Torpè and Ozieri in the north and Mogorella in the centre-west of the island. Another wildfire near Cagliari was extinguished after affecting a disused carpentry and “brushing” an apartment, according to the fire service.

The affected areas near Palermo, Sicily were Altavilla Milicia, Casteldaccia, San Martino delle Scale and Castronovo di Sicilia, though the fire service confirmed the situation had improved significantly by Wednesday and by Thursday the alerts had been downgraded from yellow to green ('pre-alert', the lowest level).

The Department of Civil Protection shared advice on helping to prevent forest fires on its social media channels, with the tips including: not discarding cigarette ends or matches, not discarding any other rubbish (as this can be flammable), not parking on dry grass, not lighting fires anywhere where this is forbidden, only lighting fires in specially equipped areas and not abandoning it until it is completely extinguished, and following any orders issued by local municipalities.

READ ALSO: Italy's firefighters crowned the best in the world

Around a third of Italy's surface is covered in forest, and summer fires have been deadly in recent years. However, this year the country has been far less badly affected than in 2017, when by July 25th the Department of Civil Protection had received 950 requests for help from regions. This year, by that date the figure stood at 186.

Hundreds of separate wildfires last year prompted the evacuation of hundreds of people, with a dramatic blaze at Mount Vesuvius among the largest of the fires and dozens of animals killed in one fire in Sicily.

Many of those blazes were started due to “arson or stupidity” according to emergency services, , including by some volunteer firefighters hoping to collect bonuses. An unusually hot summer and low levels of rainfall, followed by strong winds, allowed the fires to spread quickly once they began.

This year, Italy has so far been spared such serious fires, but destructive wildfires have swept other European countries following a record hot summer.

Italy has sent two of its Canadair water-bomber planes to assist with firefighting efforts in Greece, where a fire in the capital Athens has killed over 70 people this week.

Fires have also been raging in northern Europe, even north of the Arctic circle, and Italy has been assisting Sweden in firefighting efforts as the Scandinavian nation has battled to subdue dozens of simultaneous blazes across the country.