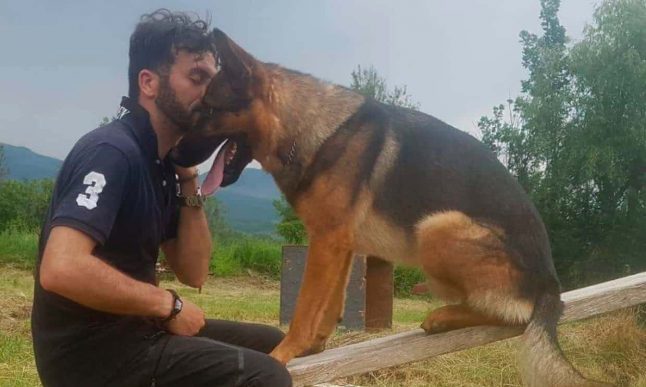 There have been calls for tougher punishments for those who harm and kill animals in Italy after a hero rescue dog was found poisoned.

Kaos, a German shepherd, was hailed a hero after he and his owner Fabiano Ettore helped rescue survivors trapped beneath rubble at the scene of the Amatrice earthquake in 2016.

Kaos and Ettore were among those who worked for several weeks to assist rescue workers after the disaster, in which 230 people were killed.

Ettore found Kaos dead in the garden of their home in Sant’Eusanio Forconese, in L’Aquila province, on Saturday.

In a heartfelt message which has been shared more than 67,000 times on Facebook, Ettore said the death of his “loyal friend” had left “an unbridgeable void”.

“I have no words,” he said. “I can’t understand such a horrible act. He was alive at least until two o’clock in the morning, as I heard him bark.”

Animal rights activists condemned the killer as a “dangerous criminal” and called for more severe penalties against those who harm animals.

“They killed the hero who, together with rescuers, dug with his four paws during those dramatic hours to find survivors,” said Rinaldo Sidoli, a communication manager for Animalisti Italiani.

“Kaos saved humans, and those same humans poisoned him.”

On Monday, Health Minister Giulia Grillo wrote on Facebook of her sadness over the “terrible, unjustified act,” and said that, along with environment minister Sergio Costa and justice minister Alfonso Bonafede, she was “working to create tougher punishments for these odious crimes by heartless criminals.”

Ettore is now awaiting the results of tests by a police anti-poison unit. “Together with the results of the autopsy, we will know with certainty, as I believe, that my dog ​​has been poisoned,” he told La Stampa.

Kaos also helped in the rescue efforts at the site of another earthquake in Norcia and most recently, he recently helped in the search for a missing person.