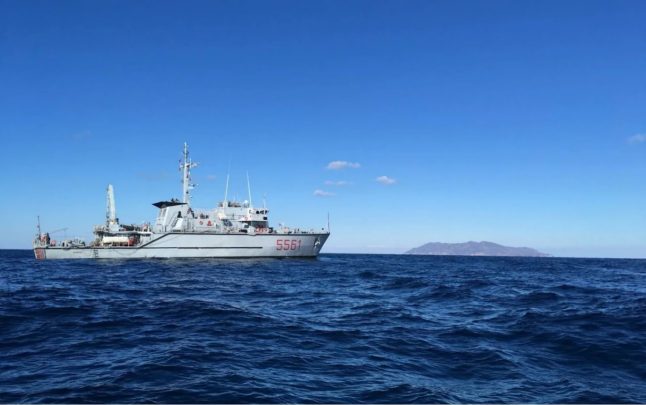 One of the Italian naval minesweepers that discovered the submarine wreck. Photo: Marina Militare

The submarine, which was sunk accidentally, has been found off the coast of the small island of Capraia, north of Elba in the Tyrrhenian Sea after lying lost at the bottom of the sea for more than a century.

The wreck of the submarine, named Alberto Guglielmotti, was spotted by two Italian navy minesweepers taking part in a routine exercise in the area.

Navy specialists then used an underwater robot called a Multipluto to explore the wreck and verify its identity. Images taken by the robot showed the submarine’s cannon as the well as damage inflicted by the British warship. An image taken by the robot showing part of the submarine. Photo: Marina Militare

In March 1917. British warship HMS Cyclamen sank the submarine after mistaking it for a German U-boat. All 14 crew members on board lost their lives.

Italy and Britain were allies during the First World War.

One of the minesweepers that made the discovery, Gaeta, also located the wreck of the HMS Saracen, an English submarine sunk by the Italian navy during the Second World War, Rai reports.

“This discovery is testimony to the courage and dignity of these men who, more than 100 years ago, served their country and made the ultimate sacrifice,” the Italian navy said in a statement.