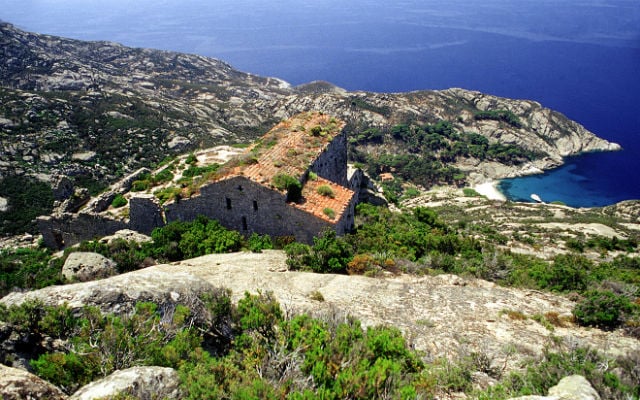 The Monastery of St. Mamilian on the off the beaten track island of Montecristo. Photo: R. Ridi – archivio pnat.

When French nobleman Edmond Dantès is falsely accused of treason in Alexandre Dumas' novel The Count of Monte Cristo he is imprisoned in a remote island off Marseille.

A chance encounter leads to his escape and soon after the discovery of a treasure fortune on a small Italian island. As the plot unfolds, Dantès takes the title Count of Monte Cristo and returns to Paris to seek revenge on those who falsely accused him.

The story was pure fiction although the island that catapulted Dantès to revenge is not. Situated approximately 50 kilometres from Porto Santo Stefano in Tuscany, on Italy's Tyrrhenian coast, the 10 kilometres-squared island in the Tuscan Archipelago, of which Elba is the main island, remains bathed in mystery, primarily because it is out of bounds to most tourists.

The count for Montecristo these days is very limited. A maximum of 1,000 visitors per year, a quota set by the EU to protect the island's environment, are allowed to step foot on the island. Six hundred of those places are reserved for students, meaning the waiting list to be one of the lucky 400 adults who see Montecristo can be very long.

Montecristo isn't easy to reach either, part of the reason why Dumas sent his fictional hero there to find a treasure chest.

“The island is not served by scheduled ferries and therefore those who get authorization to visit must independently find a boat suitable to cover the approximately 40 nautical miles from the mainland,” Aurora Ciardelli, a spokeswoman for the Tuscan Archipelago's National Park, told The Local.

Any individual looking to visit may have to find or convince at least 39 other people to go. “Individual applicants who are not organized in groups of at least 40 people may encounter difficulties in organizing the trip,” adds Ciardelli.

Before you organize transport however, you'll need to get authorization to visit from the local branch of the police.

“Requests for authorization to visit must be received by January 31st of each year for the current year,” Micheloni Riccardo, of the Carabinieri's Biodiversity Department in Follonica, which issues authorizations to visit Montecristo, told The Local by email.

“Bathing, accommodation and navigation around the island are not allowed, while all the general rules for the safeguarding of protected areas must be observed,” added Riccardo.

Montecristo is only open to visitors twice a year: Between April 1st and April 15th and August 31st and October 31st.

So what makes a visit worth it? The island is more than 5 million years old and its unspoiled nature makes it a rarity in a globalized tourism market. The lack of human activity has made Montecristo a favourite with all kinds of marine species, including whales. Like a leap into the past, Montecristo affords a chance to see nature in its purest form. The Etruscans, the Greeks and the Romans all found uses for the island.

Tourists who can't follow in the footsteps of antiquity and reach Montecristo can however still visit other islands in the Tuscan Archipelago. Elba, Giglio, Capraia, Pianosa, Gorgosa and Giannutri are all popular destinations where history and formidable natural landscapes meet.

Pianosa, the neighbouring island north of Montecristo, was a maximum security facility until 1999, when the prison was closed and the island was opened to the public. Pianosa's role as an incarceration centre throughout the 19th and 20th centuries inadvertently helped protect the island's ecosystem and today it is a haven for divers and snorkelers.

“Snorkeling… allows the observation to a few meters of depth of groupers, lobsters, bream, dentex, moray eels and another thousand colored Mediterranean species,” reads a page on the Tuscan Archipelago's National Park website. A maximum of 250 tourists per day are allowed to visit Pianosa.

Despite such idyllic natural conditions in the Tuscan Archipelago's smaller islands such as Pianosa and Montecristo, the authorities face an uphill struggle to protect them from their recent human footprint.

“The consumption of soil for too many buildings and forest fires due to carelessness and imprudence or deliberately caused by man damage and impoverish our beautiful islands,” Ciardelli told The Local.

Other environmental threats persist too.

“The most serious environmental hazards are the risk of marine pollution, especially due to the presence of plastics and the release of hydrocarbons and the loss of biodiversity due to the introduction and spread of invasive alien species, both plant and animal,” added Ciardelli.

For those thinking of catching a sneak glimpse of Montecristo without passing through the allotted red tape, chances are you'll be captured – on security cameras at least. “A remote surveillance network has been established using cameras positioned on all the islands of the archipelago,” warns Ciardelli.
Lucky visitors who are granted a permit however will be able to visit the caves below the Monastery of St Mamilian and relive some of the best moments in Dumas' classic novel. Although they are unlikely to find a treasure chest.
People wanting to seek authorization to visit Montecristo will have to fill out this form. More details here.
READ MORE: Why the Italian island of Burano is well worth the effort

STRIKES
How will motorists be affected by Italy’s petrol station strike?