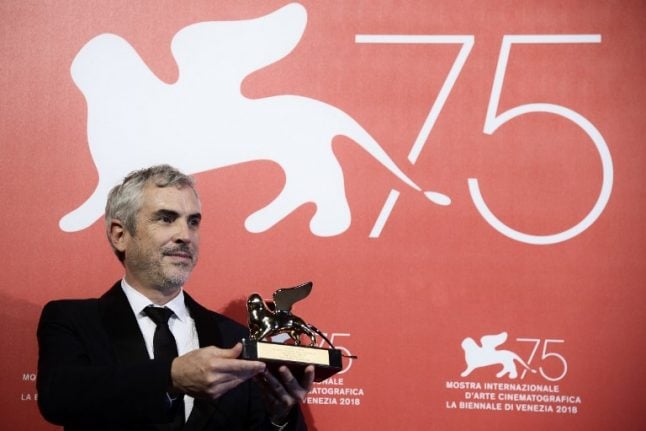 Director Alfonso Cuaron poses with the Golden Lion award he received for Best Film for the movie "Roma" on Saturday. Photo: Filippo MONTEFORTE / AFP
With its highly emotional story centred on an indigenous maid working for a middle-class family in Mexico City in 1971, it has been hailed as Cuaron's most personal film — and also his best.
Cuaron told reporters that in an incredible coincidence “today is the birthday of Libo, the woman the movie is based on. What a present!”
The film industry bible Variety said “Roma” is likely to go down as a “masterpiece”.
“It is no mere movie — it's a vision… where every image and every emotion is perfectly set in place,” said critic Owen Gleiberman.
Cuaron “dunks us, moment by moment, image by luminously composed image, into a panorama of the hurly-burly of Mexico City.”
The Italian press declared it “sublime” while for The Guardian's Peter Bradshaw it was a “complete triumph”.
Venice has become the launchpad for the Oscars race with Hollywood heavyweights jostling for attention in a line-up director Alberto Barbera called “the best in 30 years”.
Vintage year
Cuaron, 56, reconstructed his childhood home for the Netflix-backed film, borrowing furniture back from relatives to recreate how it was when he was 10. But the heart of the film is the “luminous” performance of first-time actor Yalitza Aparicio, who plays Cleo, a young live-in maid of Mixteco heritage who looked after the director as a boy.
“Cleo is based on my babysitter when I was young. We were a family together,” Cuaron told AFP. “But when you grow up with someone you love you don't discuss their identity. So for this film I was forced to see myself as this woman, a member of the lower classes, from the indigenous population. This is a point of view I had never had before.”
The second prize Silver Lion went to France's Jacques Audiard for his hugely enjoyable Western “The Sisters Brothers” starring Joaquin Phoenix and John C Reilly. Another Wild West tale, “The Ballad of Buster Scruggs” by the Coen
brothers, won best script.
Having missed out on an Oscar last year, Willem Dafoe took best actor for his acclaimed portrait of the painter Vincent Van Gogh in “At Eternity's Gate”. Britain's Olivia Colman took best actress for playing the needy and weak-minded Queen Anne in “The Favourite”, a viciously funny and apparently accurate historical drama about two powerful women competing for her favour.
Colman, 44, who is playing Britain's present monarch in the television series “The Crown”, said she “loved every second” of playing her 18th-century predecessor, “even if none of us knows what it is like to be a queen”.
The film's Greek director Yorgos Lanthimos of “The Lobster” fame won the Grand Jury Prize.
It was one of several movies with strong female stories vying for the Golden Lion — with all three of its leading actresses tipped as Oscar contenders.
Even so the organisers were lambasted for choosing only one female director among the 21 competing for the top prize for the second year in a row. Australian director Jennifer Kent did however win the special jury prize for “The Nightingale”, her stirring story of revenge and friendship involving an Irish convict woman and an Aboriginal tracker in colonial Tasmania.
By AFP's Fiachra Gibbons