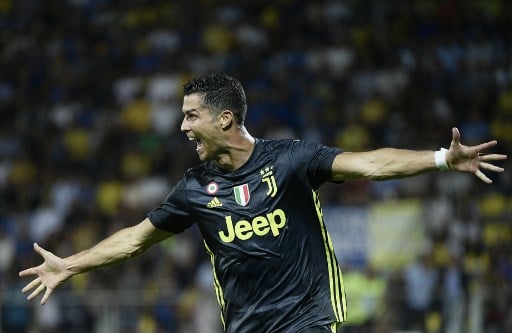 Cristiano Ronaldo celebrates after scoring during the Italian Serie A football match between Frosinone and Juventus Turin on September 23, 2018. Photo: Filippo Monteforte/AFP

Here are five things we learned from Serie A this weekend:

“Another important victory! Come on, guys, all together! #finoallafine” (until the end), wrote the five-time Ballon d'Or winner after a week of highs and lows.

The previous weekend, the Portuguese superstar had scored his first goals for Juventus with a double against Sassuolo.

Then he was controversially sent off for the first time in the Champions League in Valencia.

His desire for redemption was fulfilled when he broke through in the 81st minute, after
Frosinone had frustrated Juventus' attacks.

In added time, substitute Bernardeschi controlled the ball well to finish off a Ronaldo counterattack.

READ ALSO: Juve, Napoli and Roma all win in first Seria A weekend

Italian winger Federico Chiesa, 20, celebrated scoring the third goal for Fiorentina in a 3-0 win over SPAL by running over to hug his younger brother Lorenzo, also a promising footballer in the team's youth academy, and a ball-boy for the Tuscany club on Saturday, watched by dad Enrico, also a

“Seeing them both down there, wearing the Viola jersey, with Federico embracing his brother with such a protective air, it was truly moving,” mum Francesca Chiesa told Firenzeviola.it.”

It reminded me of when Enrico embraced Federico when he was a ball-boy. For a moment, the two phases of life crossed over.”

Roma finished third last season but sold several players, including goalkeeper Alisson to Liverpool, Radja Nainggolan to Inter and Kevin Strootman to Marseille, and are 14th after a 2-0 defeat at Bologna.

“Eusebio is one of the best young coaches we have in Italy, for reasons of financial fair play the team has been changed, three players who were the backbone of Rome have been sold, I trust him and I hope he can continue to do his work, he needs to stimulate the group to find the key to the problem,” Ranieri told Radio anch'io Sport.

“I am a fan, Rome is in my heart, but I hope that Di Francesco can move forward.”

READ ALSO: Italy's Serie A turns a profit for the first time in 17 years

Ex-Juventus player Gonzalo Higuain scored his first goal at the San Siro after just two minutes but AC Milan twice let their advantage slip and were held 2-2 by Atalanta.

Gennaro Gattuso's side have just one win from four games, and are 12th in the table, with a game in hand.

The former European giants also threw away a two-goal lead to lose at Napoli, with Higuain rescuing a 1-1 draw in Cagliari.

“This is a two-faced AC Milan right now, as soon as we drop the intensity we start struggling,” said Milan sporting director Lorenzo.

“Throughout the game, we do really good things and then we struggle.

“It's not an alibi, but if we look at the past few years, AC Milan have always come sixth in the league.”

Of those, 399 have come in the Napoli shirt along with one game for Brescia.

Hamsik – also Napoli's record goalscorer with 120 goals in 100 matches – has played 506 total games for the club, and is closing in on former captain Giueseppi Bruscolotti's record of 511.