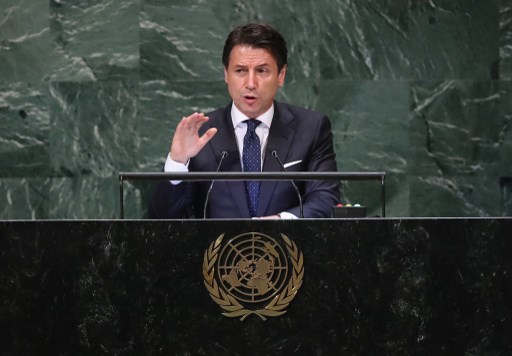 After declaring last week it was setting the public deficit at around 2.4 percent of gross domestic product (GDP) for the next three years, Rome now plans to reduce the targeted gap to 2.2 percent in 2020 and 2.0 percent in 2021, the Corriere della Sera and Repubblica dailies said.

Prime Minister Giuseppe Conte had sought to assuage concerns over the budget late Tuesday, by vowing to speed up Italy's efforts to reduce its public debt which is at a sky-high level of 131 percent of GDP.

The government has agreed to work to lower debt levels “consistently over three years”, Conte said in a statement after meeting other top ministers to discuss the issue.

He gave no numbers however, and officially the government said it would follow through with its original plans.

Conte and the leaders of Italy's coalition parties, the far-right League and anti-establishment Five Star Movement, were set to meet again to discuss the issue further on Wednesday.

On Tuesday, League head Matteo Salvini, who is a deputy prime minister, threatened to seek damages from European Commission president Jean-Claude Juncker for scaring off investors by attacking the budget plans.

The yield on Italian government bonds has spiked higher in recent days as worried investors demand more interest to hold onto Italian debt.

The closely-watched spread between the rates on 10-year bonds paid by Italy compared with those offered by Germany, which is a measure of the added risk perceived by investors to holding onto Italian debt, also rose.

It hit the highest level in a month on Monday amid fears Italy's mammoth debt — the eurozone's second biggest after Greece — could grow further.