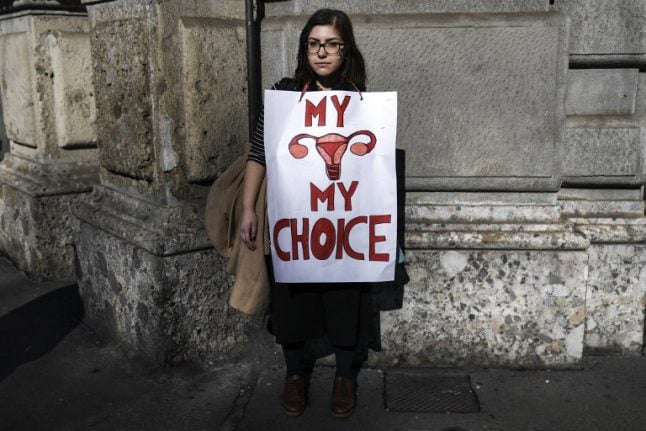 At a women's rights march in Milan earlier this year. Photo: Marco Bertorello/AFP

Councillors approved a motion put forward by Alberto Zelger, a member of the League party, which declares Verona a “pro-life city”, demands public funding for anti-abortion groups and calls for the council to promote a regional project that encourages pregnant women to give unplanned babies up for adoption.

Despite the fact that abortion is legal everywhere in Italy, and amid protests from women's rights group Non Una di Meno – whose members showed up at city hall dressed as “handmaids” in reference to The Handmaid's Tale – the conservative-led council passed the motion on Thursday night by 21 votes to six. The motion's backers – who included Mayor Federico Sboarina, members of the League and others from the right-wing majority, plus the head of the centre-left opposition – had also sought to add a proposal that would make it obligatory to give aborted foetuses a burial, even if the woman herself opposed it. However, that move did not make it to a vote.

Motion 434, as Zelger's proposal is officially known, calls itself “an initiative to prevent abortion and promote motherhood”. The councillor, who heads a pan-European anti-abortion movement, put it forward earlier this year to coincide with the 40th anniversary of Italy's abortion law, which since 1978 has made the procedure legal for any woman in the first 90 days of pregnancy.

The motion is sharply critical of the national legislation, which it claims has “contributed to the use of abortion as a mode of contraception”. The text also claims that Italy is “missing” 6 million children from its shrinking population as a consequence of abortion.

“The premises are false and don't cite official data,” according to Non Una di Meno, which decries the fact that public funds will not be allocated to health services but to projects run by Catholic groups with which Councillor Zelger has links.

Suggesting that “sometimes just a little economic aid or the prospect of a job is enough to give a woman in difficulty the peace of mind needed to look after her child”, his motion calls for funding for anti-abortion projects to be written into Verona's budget – including one that offers monthly payments to women who keep their babies. It also calls for materials promoting another project that encourages women to give up babies for adoption anonymously to be displayed in city hall “and all council spaces”.

Italian women already face obstacles to abortion in the form of a clause in the law that allows medical staff to refuse to carry out abortions on the grounds of religious or personal beliefs. According to health ministry data from 2016, just over 70 percent of gynaecologists in Italy refuse to carry out the procedure, a figure that has risen sharply in recent years.

Italy's new minister of families, League member and former vice-mayor of Verona Lorenzo Fontana, is also openly anti-abortion. Shortly after taking office in June he told the press that he would try to reduce the number of abortions carried out in Italy, including by giving doctors greater liberty to try and dissuade women from seeking them.

The official number of abortions in Italy has already been steadily declining for decades, and the country has one of the lowest abortion rates in the EU. While the Health Ministry has argued that the decline means the rise in medical objectors isn't affecting women in crisis pregnancies, many campaigners say it's the opposite, and that increased difficulties in accessing abortion is pushing more women to resort to illegal, unsafe abortions or to seek the procedure abroad. A woman in Sicily marches with a banner saying 'Free to choose'. Photo: Francesco Villa/AFP