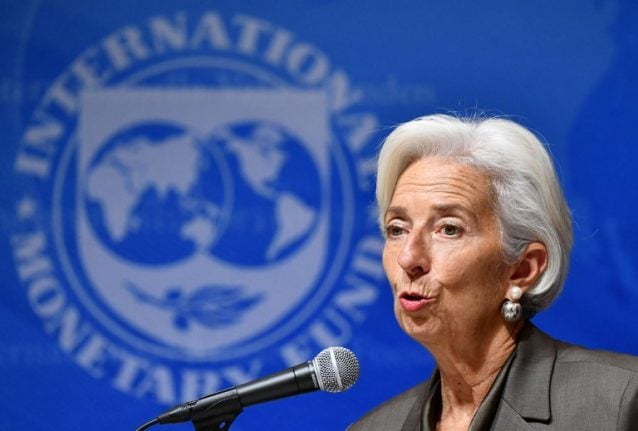 Head of the IMF Christine Lagarde has warned Italy over its budget. Photo: Kazuhiro Nogi/AFP

“I will remind all of us that, when you are a member of a club and you decide to stay in that club… then you play by the rules of the club,” Lagarde said at the International Monetary Fund's annual meetings in Bali.

“When it comes to financial affairs, that certainly applies to the Italian commitment in terms of fiscal discipline.”

“It's a budget that risks deviating significantly from European norms,” he told AFP in an interview at the IMF meetings. He added that there were “two pitfalls” to avoid: a clash between Rome and Brussels over spending, and any member state ignoring accepted norms.

“Italy is at the heart of the eurozone,” Moscovici said. “It is in the eurozone's interest that Italy be strong and it's in Italy's interest to be a nation that respects common rules.”

The Italian government insisted on Wednesday that it would stick to budget forecasts despite a jump in borrowing costs sparked by nervous bond investors, and concerns over the numbers underlying its spending plan.

Late Tuesday, the Italian parliament's budget office (UPB), which is charged with verifying whether the government's spending and revenue plans meet EU limits, rejected the forecasts used in the 2019 budget as too optimistic.

The government bases its budget on 1.5 percent growth, while the UPB expects growth to reach between 1.1 and 1.3 percent, and the International Monetary Fund only sees an expansion of around 1.0 percent.

Slower growth than forecast would translate into less revenue for the government, resulting in a higher-than-planned deficit, in turn raising concerns at EU headquarters. Lagarde expressed hope that questions over the budget can be ironed out.

“So I think the time when the Italian authorities actually submit their budget, that will give the European Commission and their partners a time to assess exactly the journey between the rhetoric and the actual numbers,” she told a press briefing on the Indonesian resort island, where the IMF and World Bank are holding annual talks.

“It opens a period of, I hope, dialogue which will bring everybody back to the rules of the game and how the club is functioning.”

The government's plans to increase the budget deficit next year to 2.4 percent to step up social spending has raised concerns in Brussels, which believes Rome needs to cut the deficit to start cutting its massive debt, which exceeds 130 percent of annual economic output.

Moscovici rejected any suggestion that running over budget would serve Italians well.

“Who pays public debt in the end? The people,” he said.