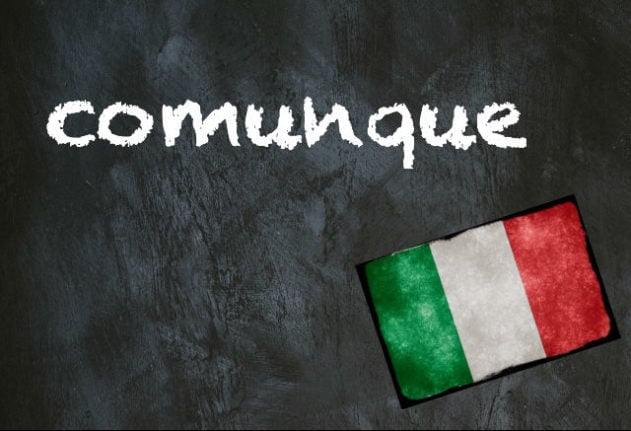 Comunque is one of those words that make more sense when you hear them in context – and that's handy, since in Italy you'll hear it a lot.

It's used in a few different ways. One of the most common is to mean 'anyway' or 'in any case'.

Non sai dov'è? Grazie comunque.
You don't know where it is? Thanks anyway.

Sarà difficile trovarne… Comunque, ci proverò.
It will be difficult to find them… In any case, I'll try.

The difference is subtle, but comunque can also mean something more like 'but still' or 'nevertheless'.

Abbiamo avuto dei danni, comunque poteva andare peggio.
We had some damage but still, things could be worse.

Hai fatto bene a venire, comunque potevi avvisarmi.
I'm glad you came, nevertheless you could have warned me.

Now here's where comunque gets a little more complicated: it's also 'however' or 'no matter how'.

But often when you're using it this way – especially when you start a sentence with it – you'll need to use the subjunctive, because you're talking about an indefinite possibility ('however that may be…').

Comunque tu dica, sbagli.
Whatever you might say, you're wrong.

Comunque sia, preferirei restare.
However that may be, I'd prefer to stay.

However (!): that may be how comunque was originally used, when it used to be confined to relatively formal language, but nowadays the rules – especially in spoken Italian – are a lot less strict. As this style guide laments, it's common these days to hear comunque used without the subjunctive, more like plain old 'but' – or even as one of those common filler words that don't really mean a thing.