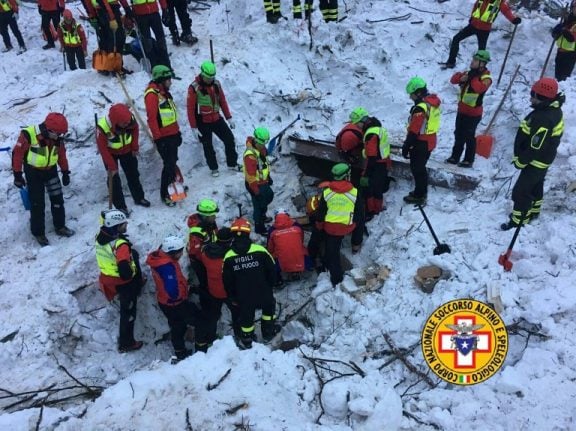 Italian rescuers search for people trapped under the ruins of the Hotel Rigopiano in a photo handout released on January 23, 2017 by the Corpo Nazionale Soccorso Alpino e Speleologico

Such notices are typically made when prosecutors are preparing requests for their recipients to be brought to trial.

The snowslide, which engulfed the Hotel Rigopiano in Abruzzo on January 18, 2017, killed 29 people, and was Italy’s deadliest avalanche in almost a century.

The charges brought against those notified are likely to include manslaughter and causing injury though negligence by failing to take adequate precautions to protect the hotel’s residents.

Mistakes made at the time of the disaster are also believed to have contributed to the scale of the tragedy.

Shortly after the incident it was reported that a phonecall from the hotel requesting help was initially dismissed by authorities as a hoax, delaying rescue efforts.