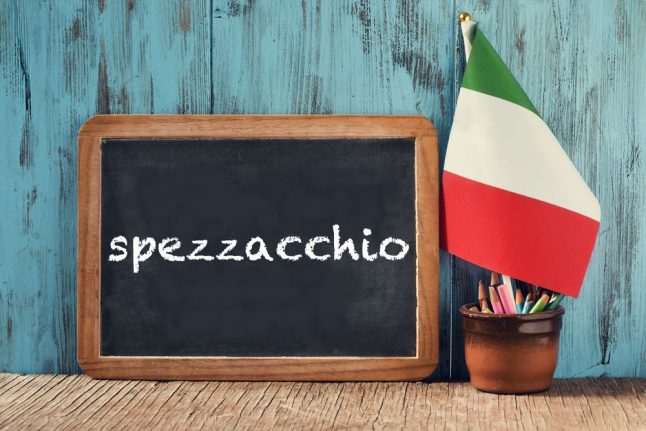 Thus has Rome's official Christmas tree been dubbed, just hours after its arrival in the capital's Piazza Venezia. But what does the nickname mean?

You won't find it in the dictionary, so let's divide it into its parts: first, the verb spezzare, which means 'to break' or 'to split'. It can be literal…

It's not always negative: spezzare is often used to mean simply breaking something into pieces, separating or dividing it.

Abbiamo spezzato il viaggio in più tappe.
We broke up the journey with several stops.

In menswear, for instance, a spezzato suit is one worn separately, i.e. mixing and matching jacket and trousers, and it's rather dashing. If you suspect that Spezzacchio isn't exactly a compliment, though, you'd be right. This is where the second part of the word comes in: ~acchio, a suffix that you can add to the end of a word to imply that it's small, poor or imprecise.

This part's a bit trickier to pin down: it might be a regional variation of the pejorative suffix ~accio (the same one we looked at in the word giornataccia, or 'bad day').

Alternatively, it could be a subtly different one that functions a bit like '~ish' in English, to show that something doesn't exactly fit the bill.

But when you attach ~acchio to a noun, it usually implies that it's small or young: an orsacchio (orso + acchio), for instance, is a 'little bear'.

One more (charitable) possibility: ~acchio can also be the equivalent of our suffix '~er' in English, which shows that something performs a particular action or purpose.

None of them are exactly what you'd want your new Christmas tree to be called – but it is arguably better than Spelacchio, last year's threadbare fir, whose nickname derived from the verb spelare ('to pluck') and translated roughly to 'Baldy' or 'Mangy'. Or, as some wags dubbed it, The Toilet Brush.