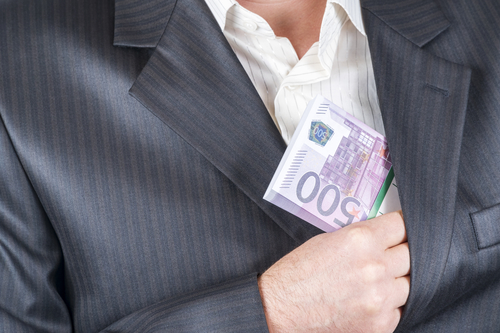 The Italian economy loses 236 billion euros a year to corruption, which is about 13 percent of gross domestic product, or equal to 3,903 euros per inhabitant.

The analysis was conducted by European Green Party for the European Parliament, based on figures from the American NGO RAND.

89 percent of Italians think that corruption is “extremely widespread” in their country, with 84 percent convinced that it is “part of the business culture” of Italy.

The study highlights how, in Italy, the wasted money could resolve all of the country’s major social problems, Repubblica writes. The cost of corruption in Italy is more than one and a half times the national public health budget.

In Italy, 80 percent of inhabitants believe that corruption is so widespread in their country that the majority don’t bother to report it.

The figure was the same in more than half of European member states, with the same figures found in Bulgaria, the Czech Republic, Croatia, Cyprus, Greece, Hungary, Lithuania, Latvia, Romania, Portugal, Slovakia, Slovenia and Spain.

While Italy suffered most from the cost of corruption overall, Romania was found to be the most corrupt country when looking at the cost as percentage of GDP.

Romania loses 15.6 percent of GDP to corruption every year.

More generally, corruption seems to be a bigger problem for Eastern Europe, as well as for Italy: Bulgaria, Latvia and Greece lose about 14 percent of GDP each year, Croatia 13.5 percent, Slovakia 13 and the Czech Republic 12.

On the other hand, the Netherlands came out as the least corrupt European country.  Corruption here costs just 0.76 percent of GDP, although that’s still about 4.4 billion euros.

In total, the European Union loses 904 billion euros of GDP to corruption, if the indirect effects are included in the calculation, such as lost tax revenue and the reduction of foreign investments.

To put the figures in context it’s said that ending world hunger would cost 229 billion, providing primary education to all the children of the 46 poorest countries on the globe 22 billion, and eliminating malaria four billion.

The study showed that across all European countries, most people think their government's efforts to combat corruption are ineffective.

The only institutions trusted by a large majority are police forces, and trust in European institutions is as low as four percent.

Denmark and Finland came next with four billion each. And in the United Kingdom corruption costs 2.3 percent of GDP, or about 41 billion euros.