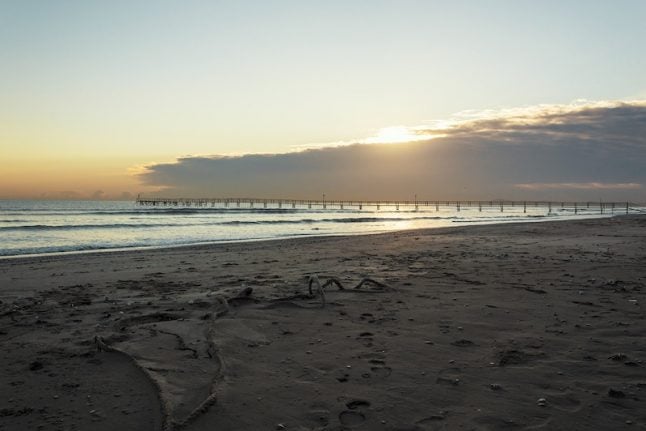 Winter in Rimini, the only time you'll have the beach to yourself. Photo: DepositPhotos

Like football, truffles and flu, tourism also has an off season in Italy.

It’s from November through February. In December, except for the pilgrims pouring into St Peter’s Square and skiers to the Dolomites over Christmas, Italy doesn’t seem more touristy than Indianapolis. That’s despite hotels dropping their rates and hardly any lines for museums.

Some places in Italy are even advisable in the off season.

I’d never been to Rimini, the renowned beach town on the Adriatic. A former colleague who lived there warned me off it, saying you can’t see a speck of sand on the beach from all the bodies. Add in the long string of bars and clubs and Rimini sounded like Fort Lauderdale with wine instead of Bud.

With my girlfriend Marina getting a long weekend earlier this month, I rented a car and drove us the 240 miles through Lazio and Abruzzo and up the coast into Emilia-Romagna.

Marina was the perfect guide. Her mother has roots in Romagna and as a child Marina made frequent trips to Rimini to visit her grandmother. She remembers playing on the broad, sandy beach with her cousins and their families eating fried ciambelle (like a sugar-coated Italian doughnut) and listening to the music in the discos.

This was her first trip in 12 years. She had never seen it this barren. We crossed the street from our hotel and walked past all the changing cabins onto a narrow wood walkway into the wide expanse of sand. As beaches go, it’s spectacular in its functionality: pleasant brown colour with nary a rock under my feet. It’s broad and its nine miles stretch on both sides to the horizon. I counted five other people: three joggers, a man walking his dog and a woman going for a lonely walk. We were all wearing heavy coats, not going near the cold, grey water. Still, Rimini and the Adriatic were magical in a mystical way. We heard no music. We heard no talking. We heard no cars. Just the sound of birds overhead and crushed sand under our feet.

Rimini in winter would be a good place to write a book.

Too bad. What they’re missing are some amazing bargains. Marina found the four-star Hotel Diplomat Palace across the street from the beach for — get this — €65 for two nights. In July it’s €75 a night. That’s with a beautiful view of the sea and a full spa, complete with Jacuzzi, steam room and sauna. Oh, yes, did I mention the full breakfast buffet with food tables about 10 metres long?

The hotel wasn’t close to full. In December, we felt as if we had the whole town to ourselves. We walked through Rimini’s Centro Storico which is “storico” (historic) in name only. Allied forces bombed it into oblivion and the town rebuilt it into the tourist centre it has become today. But unlike other bombed cities such as Naples, Rimini built a charmless business centre near Piazza Tre Martiri, named for the three civilians hanged there by retreating Nazis at the end of World War II.

But Rimini’s Christmas decorations were tastefully done, just enough to give us a feel of holiday spirit without hearing Andrea Bocelli singing Silent Night. We walked under a string of wreaths over the narrow, romantic walking mall to Piazza Cavour, Rimini’s main square and truly majestic in its chilled solitude. A 50-foot tree awaited decorations while the usually bustling Caffè Cavour was only half full of people sipping wine next to space heaters at the covered outdoor tables.

Bordering the massive piazza were the 16th-century Palazzo Garampi, Rimini’s city hall that was rebuilt after getting pummelled in the war, and the 14th-century Palazzo del Podestà, a beautiful Gothic palace. Its three arched entryways and miniature turrets make it look like a small castle. Rimini has other historic aspects too. From Piazza Cavour we walked across Ponte di Tiberio, built from 14-21 AD by Caesar Augustus and Tiberius whose Roman armies used it as a connector between the Adriatic Coast, the Po River valley in Piacenza and Via Flaminia, the main northern access to Ancient Rome. The 70-metre bridge is still in use and boats float under its five arches down the Marecchia River.

The bridge connects the centro storico with Borgo San Giuliano, Rimini’s old fishing quarters which the city brightened up with fresh coats of orange, yellow, white and beige paint without sacrificing its homey charm.

The borgo (Italian for a neighbourhood outside an historical centre) is a mishmash of narrow alleys with colourful buildings and quaint bars and restaurants. We saw a poster advertising the showing of Le Notti di Cabiria, the 1957 film directed by Rimini’s most famous native son, Federico Fellini. Born in 1920, Fellini went to a Rimini school run by nuns and spent his time drawing and directing puppet shows. He believed in using his Rimini childhood in many of his films. The sea creature at the end of his La Dolce Vita was inspired by a giant fish washed ashore Rimini’s beach by a storm in 1934. In 1937 he opened a portrait shop in Rimini and in 1939 moved to Rome to begin law school to appease his parents. (He never attended a class.) Rimini is working on a Fellini museum in his old home near the train station, but it won’t be completed until next year.

Rimini’s one must-see is Tempio Malatestiano. Italy is full of huge churches decked out in amazing frescoes but this is the only one I know dedicated to a man whose effigy was burned in Rome.

It was built in the 13th century at the behest of Sigismondo Malatesta, known as the “Wolf of Rimini” for his particularly brutal war style. Pope Pius II wasn’t too crazy about his litany of murder, rape, incest and adultery, not to mention general oppression. The pope torched his effigy and condemned him to hell, then subsequent papal forces took most of his land in battles. Old Sigismondo’s sarcophagus is near his mistress’ (see above: adultery) on one side of the church. His tortured soul has yet to be found. The beauty of off-season travelling in Italy is it doesn’t matter how many places have closed. You only need one hotel room; you only need one restaurant table. And Italy’s food has no off season.

Our first dining stop was Osteria Borgo Marina, a small, simple diner run by an Albanian woman who has lived here for years. Borgo Marina is famous for its mixed antipasti plate and we started with a big serving of pecorino romano cheese, salami, prosciutto, and a warm basket of bread. Her tagliatelle al ragù didn’t disappoint, a fantastic meaty sauce over those long, wide homemade noodles. Marina had the best breaded calamari of her life.

Rimini is the birthplace of the piadina, a sandwich made of flatbread cut open and filled with anything from meat to fish to vegetables. The best piadini joint in Rimini is NudeCrud, just over the Ponte di Tiberio in the borgo. The menu features 32 different piadinas, everything from sausage, arugula and cheese to cefalo (a local fish). I had the crudo e squacquerone, raw prosciutto with a white, gooey cheese that tasted like a five-star ham and cheese sandwich. We sat next to the only four tourists we saw all weekend. The second night we drove to Cesanatico, a former port town turned beach resort 13 miles north of Rimini with 25,000 people and one of the most charming harbours in Italy. We were at one of only two tables occupied at Cà Nostra (“our home” in the Romagnolo dialect), an elegant harbour-side restaurant. I had great ragù strozzapreti (Italian for “strangle priests”, which the little twisty pasta seems capable of doing) with a local Trebbiano wine.

Afterward, we walked arm in arm, mostly for romance but also to shield against the 4-degree cold, as we strolled under the Christmas lights hanging over the cobblestone streets. We passed no high-end businesses or chains. Just some warm cafes and wine bars filled with locals waiting for the holidays to begin.

They were enjoying a time without tourists — that is, except for the two walking past them who were here for the same reason. We came home without a tan but filled with great food and memories.

Italy… where for us, there is no off season.

John Henderson is an American writer living in Rome. This is an edited version of an article that was originally published on his blog, Dog-Eared Passport. Find more of his stories here.

Want to write a guest blog for The Local? Get in touch at [email protected] 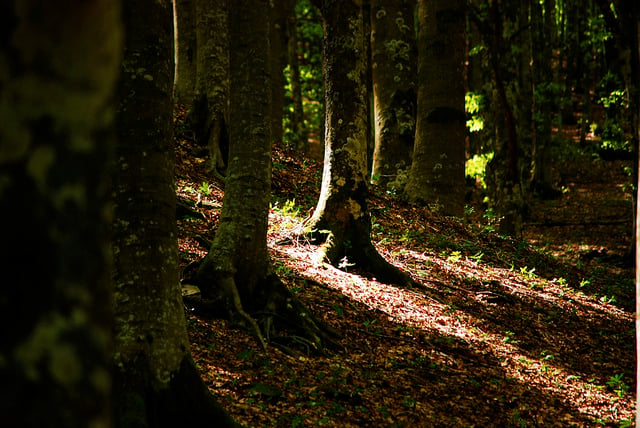 TUSCANY
Weekend Wanderlust: In search of silence in the Casentino forest 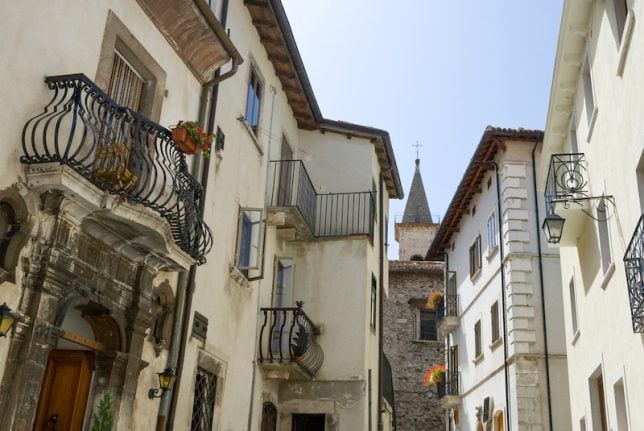