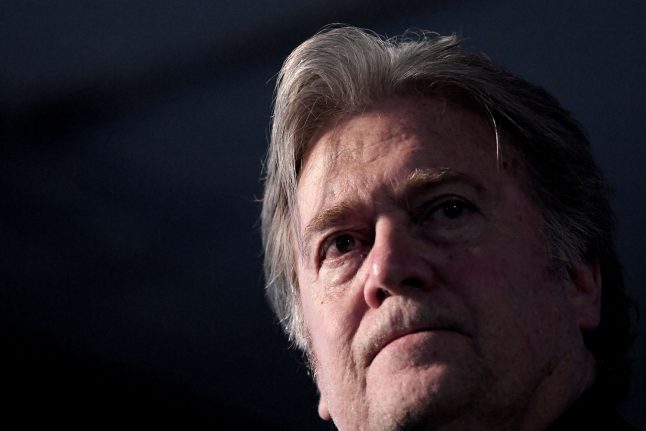 President Donald Trump's former aide in September vowed to set up “war rooms” across Europe to help form a pan-continental right-wing movement ahead of European Parliament elections in 2019.

Local activists and a network of associations protested against the plan in the village of Collepardo, expressing their views behind banners that read “Stop Bannon, Free Europe,” and “Trisulti, European land.”

The village lies close to the Trisulti charterhouse, a former Carthusian monastery now leased to the Catholic institute Dignitatis Humanae (DHI), a group close to conservative US cardinal Leo Burke and Bannon.

DHI plans to offer classes at the site east of Rome “to transmit Steve Bannon's thoughts to the next generations,” founder Benjamin Harnwell told the Italian-language daily La Stampa.

He said the project had many financial backers, but cited only Bannon by name.

After Bannon was pushed out of the White House's inner circle he began to focus on changing the dynamics of European politics, meeting with right-wing Hungarian Prime Minister Viktor Orban and Italy's anti-immigration Interior Minister Matteo Salvini.

The protest's organisers described Trisulti, founded in 1204, as a “European outpost” that symbolized “ideas that do not shut out the world.”

Harnwell said the academy would be associated with a university in Rome and hold classes there while the charterhouse was renovated.