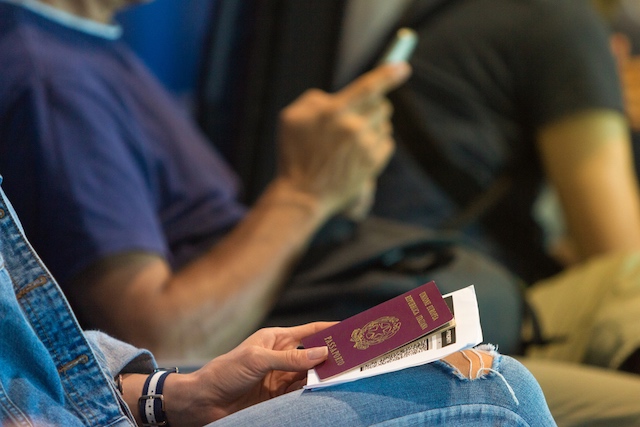 “But how can you have a son if you were never married?”, the woman behind the glass asked.

I stared at her, took a deep breath, and with an unparalleled sense of incredulity thought to myself: 'What exactly am I going to have to explain to this woman?'

“Allow me to expound: when a man and a woman love each other very much, or even when they don’t, sometimes they engage in premarital intercourse. That good old-fashioned sexy time, marriage certificate or not, can still lead to a baby.” Of course I didn’t say that, nor should I have had to – because why would I ever divulge my sexual past at a passport office?

It was at the Benevento police headquarters, or the Questura as it is called in Italy, that my lifestyle choices were being examined, all in the name of a simple passport renewal – a process that, I soon discovered, isn’t quite so straightforward.

FOR MEMBERS: How to become Italian: A guide to getting citizenship

I hold dual citizenship in Italy, where I was born, and in Canada, where I spent my formative years and adult life – up until 2016, when I decided to return from whence I came. But I did not return alone, and this has put a wrench in the process of renewing my Italian passport.

Back at the Questura, after I had established that I am a single mother living abroad with my young son, I was told that I must obtain a legally sworn statement from my son’s father to have our passports released.

“My son’s passport has not yet expired,” I began. “I am here to renew my passport.”

“Yes, I understand but you’ll need your ex-husband’s signature in order to renew your passport.”

I was growing frustrated, having to repeatedly explain that we were never married, but repetition aside, the agent echoed the same words: your ex needs to sign on the dotted line.

It was with great candour that I demanded to know why I needed consent from a person with whom I have not had a relationship in 11 years and more pressingly, what would transpire if he refused to sign.

“It is Italian law. And your father can sign if he won’t,” she responded dryly.

At that very moment, I abandoned Italian and just blurted out: “What the fuck?” At 41 years old, I couldn’t fathom needing anyone’s permission to travel, let alone my dad.

READ ALSO: 'There's no privacy setting': swapping the big city for a small town in Italy Exhausted by the back-and-forth banter with the agent at the Questura, convinced that this person had no idea what she was talking about, I headed straight to my local town hall.

I was desperate for clarity. Why do I need my ex-partner’s permission to renew my passport? What if he says no? Do I have to ask my father’s permission? Is Italy ruled by a patriarchy that belittles women?

I found the answers I was looking for from a friendly acquaintance at the municipal government office in my small town. First off, no, Italy does not employ patriarchal rule to diminish the freedoms of its female citizens. So I don’t need my father’s signature to get a passport.

Secondly, I definitely need my ex-partner’s John Hancock, just as I was told at the Questura. The law declares that any parent wishing to obtain a passport must have a signed act of assent. Any two individuals that share a child aged under 18 together, whether the couple are married, common law, separated or divorced, must give express consent in order for either of them to apply for a passport.

READ ALSO: Five ways being a parent in Italy is different from the UK While I was, at the time, still in the first stage of cultural shock – the honeymoon phase – this piece of legislature shoved me straight into the second phase: irritability and hostility. I was annoyed and angered by a law forcibly tethering me to a person I had already walked away from.

All minor children must have signatures from both parents in order to obtain a passport: this makes absolute sense to me. When I left Canada, a letter of consent to travel was drafted and signed by my son’s father and notarized by a lawyer. I completely understand and accept this standard practice, but I have trouble getting behind its application to parents.

My understanding of this Italian law is shallow, but it was explained to me that it exists to safeguard children from being kidnapped by a parent. And while the law works some of the time, it certainly doesn’t work all of the time. According to Telefono Azzurro, a missing children’s hotline, abduction by a parent is one of the top reasons why more than 100 children on average go missing in Italy each year.

My anger is twofold: this law creates, in my case, a double standard; and it inadvertently allows one parent control over the other. My son’s father doesn’t hold an Italian passport, so he certainly never has to ask me to sign off on a renewal; but I definitely have to ask him to take a day off work, head to the Italian consulate and sign an 'act of assent between parents'. He doesn’t need my signature, and I don’t need this double standard.

This law can also create an unbalanced dynamic if one parent refuses to sign. Naturally, there are provisos in cases of refusal: a passport applicant can ask a judge to step in and authorize a travel document. But I can’t shake the thought of being at someone else’s mercy, even if a judge can release me from it.

My cultural shock begins to slide into the third stage of acceptance – but as the old saying goes, I’m taking it with a grain of salt.

What you need to know about Italy's passport rules for parents

If you're a parent and your child is a minor, you need the other parent's consent to obtain or renew an Italian passport for yourself or your child – whatever your current relationship status. (The only exception is if your child's parent is dead, in which you will need to show their death certificate.)

When you're submitting your application, both parents are supposed to present themselves at the Questura in person to sign an Act of Assent between Parents (available here) in front of a public official. If one parent can't make it and they're an EU citizen, you can present their signed copy of the form along with a photocopy of their official ID document bearing their signature. If the other parent is neither an EU citizen nor in Italy, they will have to go to their nearest Italian consulate in order to sign the form in front of an official there.

If none of those options are viable, you can ask a judge (or if you're outside Italy, the consul general) to authorize your passport application by making the case for why you are unable to obtain consent. You'll be expected to provide full details of your situation, in writing, as well as the last known contact details for your child's parent so that the authorities can attempt to reach them.

The Ministry for Foreign Affairs warns that such appeals “are to be submitted only in the most exceptional of circumstances and should only be used as a last resort”.

Daniela Piteo is a Canadian living in rural Campania. In Canada, she worked as a journalist in Toronto and the Niagara region; in Italy she teaches English and blogs at Oxford Comma.