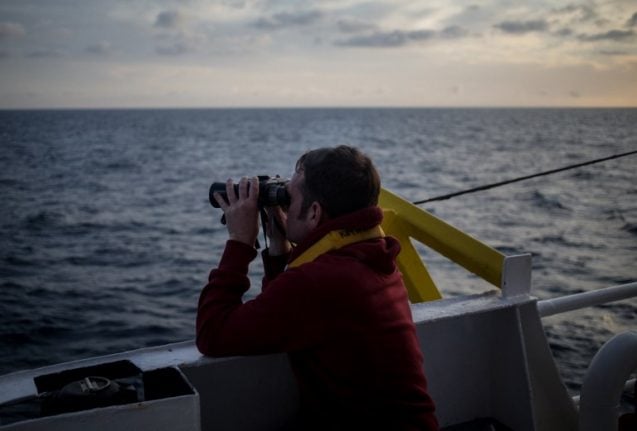 A member of crew on the Sea Watch, which has been allowed to anchor off Sicily. Photo: Federico Scoppa/AFP

The vessel rescued the mainly sub-Saharan African migrants, including six minors, off Libya a week ago, but since then Malta and Italy have both refused to let the ship dock.

“To shelter from adverse weather conditions, Sea Watch 3 has been assigned a berth 1.4 [nautical] miles [around 2.5 kilometres] from the ports of Augusta, Marina di Melilli, Siracusa,” off Sicily, the German NGO tweeted.

“Only an off-shore anchorage, so far, no port of safety,” it said.

To shelter from adverse weather conditions, #SeaWatch3 has been assigned a berth 1.4 miles from the ports of Augusta, Marina di Melilli, Siracusa.

Interior Minister Matteo Salvini has repeatedly said that no more migrants will be allowed to disembark in Italy.

“Today I'm very happy to arrive in Italy because the journey is very difficult,” said a young Senegalese migrant on board the boat on seeing the Sicilian coast.

“I've been travelling for three years and it's very difficult, especially in Libya, because that country is very hard, I went to prison three times,” he told AFP. “Will they ask, as we do, for Sea Watch to go to Marseille or will they let them disembark in Rotterdam?” Di Maio asked on Facebook.

The mayor of Syracuse, Francesco Italia, however, has said he would welcome the migrants.

“We're in touch with the captain, we have the first result of getting the boat to safety. Now we will look after those on board, the city is ready to help them and welcome them,” he told Italian television.

Twenty organisations including Amnesty International, Doctors Without Borders, Oxfam and Save the Children, on Thursday reminded Italy and Europe they were legally obliged to provide a safe port for the migrants under international maritime law.

“These people, especially the most vulnerable such as women and children, must not suffer further and must be guaranteed the humanitarian assistance to which they are entitled and the care they need,” they said in a statement.

READ ALSO: Italy's Salvini may face trial for 'kidnapping' migrants after all