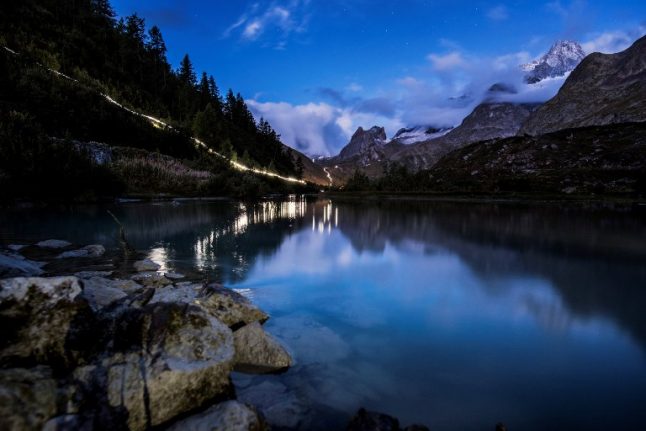 Courmayeur is one of the best-known ski resorts in Valle d’Aosta, the Italian north-western region that borders Switzerland and France. It’s popular with the international set, the Milanese and people from Turin, and has a breathtaking position at the foot of the Mont Blanc massif with its 4,810m peak. It’s a paradise for winter sports. It’s also a place with a long Alpine history, and this relationship with the mountains is very much felt by the people who live there. History and identity is kept alive through tradition and food.

The town’s centre is the pedestrianized Via Roma with its bars, restaurants and boutiques, so there’s enough to occupy you when you get back from the slopes or if winter sports aren’t your thing.

Courmayeur offers 100km of pistes and off-piste skiing. Cable cars leave from Courmayeur, Entrèves and Dolonne, and the most famous runs are the Chécrouit, the Youla, the Gigante, and the Internazionale that links Plan Chécrouit with Val Veny. The skiing down from Punta Helbronner is off-piste and only recommended for experienced off-piste skiers, even better with a guide. Enjoy 22km of cross-country skiing amidst the gentler pace of Val Ferret. Pistes run between the villages of Planpincieux and Lavachey. Planpincieux has a ski school for both cross-country and Nordic skiing, a baby snow park, cafés and restaurants. There are also night walking tours, nature trails and winter biking, or go for a ride on a snowbike.

Both Entrèves and Dolonne also have shorter intermediate cross-country tracks.

Put on a pair of snowshoes and trek off through the mountains or up to the glaciers. Alpine Adventure Travel and the Mountain Guides Association organize tours. WHAT ELSE TO DO

See another side to the mountains

The Monte Bianco Skyway is an Italian feat of extreme engineering, claimed to be the eighth wonder of the world. If you don’t like heights, don’t bother. This thing is high and its rotating cable cars give you a 360° view as you’re going up, so plenty of material there for overactive imaginations. First stop is Pavillon du Mont-Fréty (2,173m), recommended to help you acclimatize before going further. Visit Giardino Botanico Alpino Saussurea with mountain species from all over the world (only in summer), Cave Mont Blanc de Morgex e La Salle – one of Europe’s highest vineyards – and Museo Alpino Duca degli Abruzzi, which examines the history of alpinism and mountain guiding.

Alternatively, put on your snowshoes and head off on the trails. The views when you get up to Punto Helbronner (3,466m) are jaw-dropping. Mont Blanc and the Brenva glacier are on one side, the Giant’s Tooth on the other, with the Matterhorn and Monte Rosa in the distance. Go in the morning before the clouds come in and cover the view. Visit Aosta, once a pre-Roman settlement turned into one of the Empire's provincial capitals, with its archaeological museum and Roman theatre. Enjoy the wooden sculptures around the city or simply sit and watch the world go by at one of the bars in beautiful Piazza Chanoux.

Valle d’Aosta is known for its wines, the vines for which grow on its mountain terraces. Visit Maison Anselmet and Grosjeans Vins to sample some.

Steam up in the snow

Six kilometres down the valley from Courmayeur, the thermal baths at Pré-Saint-Didier are guaranteed to help you wind down. Typical cuisine including soups, fonduta and homemade cakes in a traditional chalet setting.

Popular informal bistro up on the mountainside that offers contemporary dishes using local products. Access is from the cable car from central Courmayeur or Dolonne.

Go for coffee or aperitivo in this historic bar in the centre of Courmayeur. You know that perfect image of Alpine tradition, fantastic views, good food, quiet little corners in comfortable settings and the friendliest, most welcoming staff? Go to Auberge de la Maison and that's exactly what you’ll find, plus a spa and outdoor pool to boot. Breakfast in the dining room with a view of Mont Blanc right in front of you is always the best way to start the day.

On the other side of the river to Courmayeur in the tranquil village of Dolonne, this cosy hotel in a traditional stone lodge offers bed-and-breakfast, half-board and full-board options. It’s near the Dolonne cable car with a children’s fun park in the village.

A welcoming hotel just before Plampincieux in beautiful Val Ferret that offers bed and breakfast and also has a family room for four.

Tip: avoid peak season (Christmas holidays and February) to get the best deals.