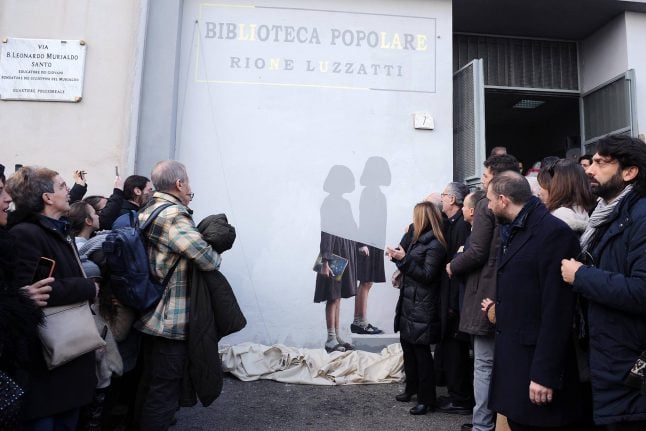 The murals, officially unveiled on Monday, adorn the walls of a public library in Rione Luzzatti, the working-class neighbourhood wedged behind the city's train tracks where Ferrante's four novels are believed to be set.

They show the series' two protagonists, Lila Cerullo and Lenù Greco, as young girls heading for the library's doors, as well as their school teacher, Maestra Oliviero, waiting inside and other children running with their book bags. The librarian of the girls' childhood, Maestro Ferraro, is pictured sitting on a bench by the entrance and holding a portrait of a real-life librarian, Agostino Collina, who founded the Biblioteca Andreoli – the area's first public lending library after World War Two – in the 1940s. The city of Naples recently announced plans to rename the institution after “Maestro” Collina.

The rest of the characters' pictures were based on the actors portraying them in the Italian-US TV adaptation of the novels coproduced by Rai and HBO, which aired to acclaim at the end of 2018. The images were created by Eduardo Castaldo, the show's photographer, who blew up his stills from the set and used them to create life-size cut-outs.

With funding from the region of Campania, Castaldo plans to create other Ferrante-inspired murals around Naples.

“Instead of doing gigantic murals, I like the idea of doing a lot of small ones, to recreate the presence of characters from the books, the series, and from everybody’s imagination,” he told City Lab. “When installations are too big, you have to stand back to take pictures. With these small ones, you have to enter the [neighbourhood]. This way, you may get to know the place, and bring some money in, too.” 'Ferrante fever' already attracts new visitors to Naples, especially international readers who encountered the series in its bestselling English translation. Several companies run tours of the books' settings, though it's unclear how much residents of Rione Luzzatti, historically one of Naples' most deprived neighbourhoods, have benefitted.

Some were disappointed when producers decided to film the TV adaptation in a specially constructed set rather than the streets of the Rione, a choice they said they made for logistical reasons.

An investment of €2 million to create a neighbourhood health centre was announced at the unveiling ceremony on Monday, which was attended by the governor of the Campania region, Vincenzo Di Luca, as well as Castaldo and actors from the TV series.

A crowdfunding effort raised more than €6,000 for a separate project that will see local schoolchildren and artists collaborate on a much larger mural inspired by Ferrante's work. The painting is expected to be completed in the same neighbourhood this spring.

After the seven episodes of My Brilliant Friend, there are plans to adapt the next of Ferrante's novels, The Story of A New Name, for a second season expected to air in late 2019.