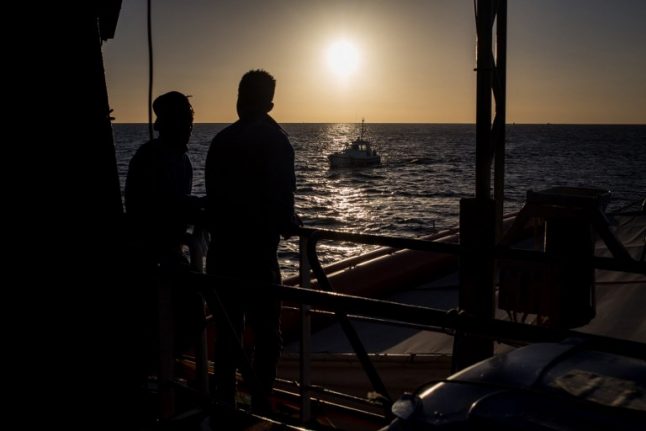 Two of the rescued migrants aboard the Sea Watch 3 NGO vessel watch the sunrise on January 31, 2019 off southeastern Sicily Federico Scoppa/AFP

The IMRCC (maritime rescue coordination centre) in Rome was alerted at 13:40 on January 18 to a dinghy in distress but said it fell under Libyan jurisdiction, despite receiving no response from the Libyan coast guard.

“There was a gap of three hours between the first sighting of the stricken dinghy by an Italian military aircraft” and the Libyan response, Agrigento assistant prosecutor Salvatore Vella told AFP.

“There were many women in the boat, one holding a newborn, not more than two months old. Even getting help 10 minutes earlier can save a life,” Vella said.

Europe has been wrestling with divisions over how to handle the problem since the migration crisis of 2015 when more than one million people arrived on its shores, many of them fleeing conflict in the Middle East.

Italy has increasingly insisted Libya handle rescue operations off the North African country since a controversial accord was reached in 2017 — with EU backing — to rebuild Tripoli's coast guard capacities.

The Agrigento prosecutors have delivered their initial investigation to Rome prosecutors, who will have to decide whether there is enough evidence for a trial of IMRCC officials for “failing to provide assistance”.

The Agrigento team will continue its investigation against persons unknown for trafficking and aiding illegal immigration.

There were only three survivors of the disaster, each of whom told Vella of the nighttime departure at gun-point in crisis-hit Libya and the moment the weather worsened causing the overloaded dinghy carrying 120 people to start sinking.

“They had been given a satellite phone to call for help, but in the panic when the dinghy began to take on water, the 'captain' dropped it into the sea.

It's not clear whether any call for help was ever made,” Vella said.

“They were packed on so tightly that each had one leg in the dinghy and the other over the side. It took a couple of hours for the dinghy to sink.

“They began to drown. They went down like stones,” he added.

One of the survivors, 25-year old Nasir from Sudan, told him “I held on, and closed my eyes so as not to see the people dying all around me”.

At 13:40 the military plane spotted the dinghy some 50 nautical miles north east of Tripoli, with around 50 people still on board and many in the water, Vella said.

It alerted the command centre in Rome and dropped two life rafts.

At 13:42 a patrol plane which works with the charity Sea Watch rescue vessel heard the radioed conversation with the command centre. It also spotted a tanker, the Cordula Jacob, which was nearby.

At 14:00 the Sea Watch was told the rescue responsibility lay with Libya.

The Sea Watch called the Libyan command centre but got no answer.

In the meantime the Cordula Jacob, unaware of the shipwreck, was sailing away from Libya towards Egypt.

At 15:02 the order came from the Rome command centre for all vessels in the area to head towards the site of the sinking.

At 16:40 the Libyan coast guard said it would take over the rescue efforts, and almost at the same time an Italian military helicopter arrived at the site to find three survivors, Vella said.

The Cordula Jaboc and the Sea Watch arrived there hours later but found neither survivors nor bodies.

Agrigento prosecutors have already passed a similar case to Rome following a shipwreck in 2013 in which close to 300 people died after the Italian and Maltese authorities delayed rescue efforts.

In that case, the Rome prosecutors called for two officials accused of delaying the rescue response to stand trial.

A hearing is scheduled in February to determine whether to proceed.