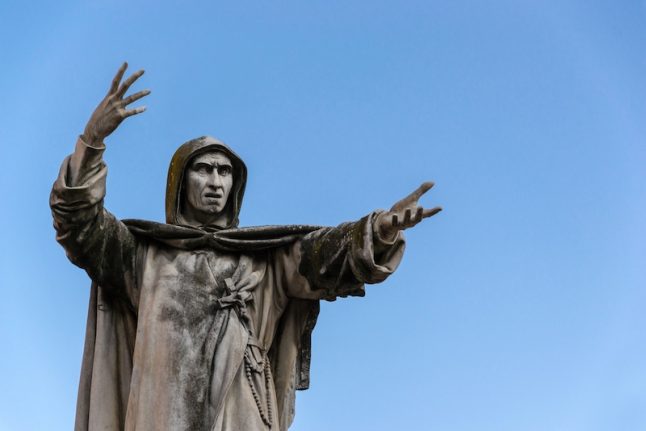 On February 7th, 1497, the inhabitants of Florence had decided many of their worldly possessions were not ‘sparking joy’, but rather leading them towards the hellfires of sin.

This event, known to history as the Bonfire of the Vanities, was carried out at the urging of the monk christened Girolamo Savonarola, one of the most famous figures in the city’s history.

READ ALSO: Dante's last laugh: Why Italy's national poet isn't buried where you think he is A portrait of Girolamo Savonarola by one of his contemporaries, now on display at the convent where he lived.

Savonarola, or Fra Girolamo, had made a long, strange journey since his birth in 1452. Born in Ferrara, to a reasonably wealthy, humanist family, it had looked like Savonarola was going to follow his father into medicine.

However, during his adolescence the young man became increasingly devout and fixated on thoughts of doom and damnation. He convinced himself that the end was very much nigh, and in 1475, in his early 20s, he joined a monastery to begin life as a monk.

READ ALSO: From football to tiramisu: A look at Italy's deepest rivalries

Over the next few years, Savonarola would be sent from monastery to monastery of the Dominican order, acting as a teacher and scholar. During this time he learned to preach and articulate his views in a forthright, engaging way, and eventually he managed to land a plum role at the Medici court in Florence.

Savonarola spent the early 1490s working crowds in Florence, introducing into his preaching set apocalyptic prophecies and fiery exhortations for listeners to free themselves from the burden of sin. This attracted large crowds, who regularly attended his sermons. Young men were particularly attracted to his theology, which promised a new order, and a rejection of the old men who ran the city.


An illustration from one of Savonarola's works in 1496.

It’s suggested that Savonarola’s preaching had a lot to do with the Medici being run out of town in 1494. Savonarola, you see, had intimated that the French would threaten to invade, and when their armies surged south, it seemed the monk had a direct hotline to the Almighty. His followers swarmed to the side of those pushing the Medici – the true target of the French – out of the city.

It was at this point that the monk – increasingly being described as ‘mad’ – started to get high on his own supply.

The monk and his followers soon gained control of the city councils and introduced harsh new laws, particularly focussing on things like sodomy. Some have surmised that this was a case of the man ‘protesting too much’.

Savonarola and his acolytes, known as ‘Weepers’ for their overwrought manner, then held a series of bonfires throughout the city. Youths would go from house to house, asking for objects to go on the fires. If people didn’t offer anything, something would be taken anyway.

Florence was under the control of religious zealots. Things continued in much this way for around two years, until Pope Alexander VI finally lost his patience and excommunicated the firebrand monk in May 1497. He would be left alone, and religious services allowed to continue in the city, if he could just keep his mouth shut.

Unfortunately, Savonarola couldn’t bring himself to do that. When a rival preacher challenged him to a ‘trial by fire’ on April 7th, 1498, he came out fighting, claiming that he could show that God had anointed him.

On the day, however, his reluctance to walk through hot coals – and a sudden, inopportune rain shower that extinguished the fires – led many to believe that he wasn’t the Chosen One after all. Savonarola was chased back to his monastery, where he was captured and taken away for some particularly nasty tortures, during which he recanted many of his prophecies and visions.

A little over a month later, on May 23rd, 1498, the city of Florence carried out a sentence of death on the monk and two of his followers. They were led out into the Piazza della Signoria where they were hung and burned simultaneously – a little overkill if you ask me, but this is the Italian Renaissance we’re talking about. A painting of Savonarola's execution in the same square where he held his bonfires.

Savonarola might have been reduced to ashes, but his legacy lives on in books, paintings, literature and even video games: Assassin’s Creed II had some memorable DLC devoted to the man. Travellers to Florence can visit not only the site of his execution, but the monastery where he wrote many of his sermons, the Convent of San Marco (today a museum).

If any lessons can be drawn from this tale of religious zealotry and fiery ends, I think, it’s that you should never take yourself too seriously.

Or, I don’t know, perhaps, don’t make promises you can’t keep… Maybe it’s even: 'don’t get too fond of the sound of your own voice'?

Whatever the case, the ‘Mad Monk’ of Florence will not soon be forgotten, especially around this time of year. On the trail of the Mad Monk