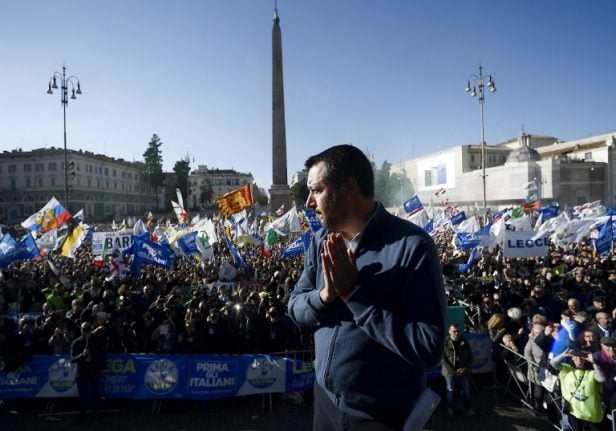 Matteo Salvini, head of the League, at a rally in Rome last year. Photo: Filippo Monteforte/AFP

February has been an important month in Italian politics. Elections took place in Abruzzo and Sardinia – two regions located in the south of the country. Both are “swing” constituencies, so the way they vote in regional elections provides important clues about changing national trends.

The elections were also seen as the first electoral test for the new governing coalition, which brings together Matteo Salvini’s League and the Five Star Movement (M5S) but is led by prime minister Giuseppe Conte.

But while the League performed strongly in both Abruzzo and Sardinia, the M5S suffered bruising defeats.

In both regions, the League led centre-right coalitions to victory, unseating the incumbent centre-left governments to install their own regional presidents.

In Abruzzo, the League doubled its support – from 13.8 percent in last year’s general election to 27.5 percent – becoming the largest political force. In Sardinia it won 11 percent of the vote. Even this latter result, though less dazzling, is historic because Salvini’s party has traditionally found very little traction in the south of Italy. It didn’t even run candidates in these two regions five years ago.

In fact the League used to be a regionalist party called the Northern League. Its main aim was to secure more autonomy for northern Italian regions. For a while, in the late 1990s, the party even campaigned for the independence of the north.

Its transformation into a nativist nationalist party, similar to the French National Front, started after 2013 under Salvini’s leadership. Today the party campaigns across the whole Italian territory with increasing success. It is probably the only case in Europe (and perhaps globally) of a regionalist party being able to radically change its territorial focus and become one of the main statewide parties. Meanwhile, the M5S is in crisis. Only a year ago, in the general election, it had won stunning victories in both regions, obtaining around 40 percent of the vote. This time round it has halved its share of the vote in Abruzzo and experienced an even more dramatic collapse in Sardinia (from 42.5 percent in 2018 to around 11 percent of the vote). The M5S came behind both centre-right and centre-left coalitions, which dominated the electoral competition.

It has been clear since late last year that the M5S has been haemorrhaging support. Yet recent developments have further damaged the party. Fresh tensions emerged just ahead of the Sardinia vote when M5S senators blocked a move to force Salvini to face a kidnapping trial. Their decision came at the direction of a controversial online vote of party members.

Nor is Italy’s current economic situation helping. Last year, the M5S won an impressive mandate from constituencies (mainly from the south) that had suffered particularly from the economic crisis. Now, it must answer for its record in government. Rather than the growth, Italy is experiencing its first recession since 2013.

While the “nativist” League can downplay economic issues, focusing its campaigning on law-and-order policies and immigration, the M5S is not in the same position. Its success depends on its ability to address the negative effects of the financial crisis and promote institutional transparency and renewal. The increasing difficulties experienced by the Italian economy might undermine its credibility.

If M5S continues to struggle, it could have a destabilising impact on the national government. Yet at the moment both Salvini and the M5S’s leader, Luigi Di Maio, are stressing that the coalition will continue. It is unlikely that either of them will pull the plug before the European election.

And in that contest, Salvini’s party is predicted to win big. It is on course to become the largest political force across Italy. The transformation of the party into a nationwide political force seems complete.

That said, the unprecedented success of the League in southern Italy could also pose new challenges. The party might struggle to reconcile demands coming from its traditional strongholds in northern Italy and the needs of its new constituencies.

Interestingly, the two largest northern Italian regions, Veneto and Lombardy, are engaged in a negotiation process with the central government to obtain more fiscal and policy-making autonomy. The process followed two referendums organised in October 2017. They were promoted by regional governments led by the League, which in Veneto and Lombardy is still strongly supportive of more federalism. Both referendums returned an overwhelming support for increased autonomy.

READ ALSO: Venice wants its money back, not independence Granting new powers to Veneto and Lombardy could unleash new dynamics of regional competition. Southern Italian regions, particularly Campania, have complained that the new regime of differentiated autonomy could undermine national unity. Some even fear that in the long term this could lead to a new Catalan scenario.

A re-emergence of regional tensions does not play in Salvini’s favour. Over the past five years he has tried to downplay the importance of regionalism and federalism to promote the League’s new sovereignist and nativist project. So far he has been able to avoid taking a clear position.

Salvini’s successes have also helped him contain opposition and pressures within his own party, but he might soon have to face a dilemma between northern autonomy and Italian nationalism. Whichever he decides, the decision could be electorally very costly.