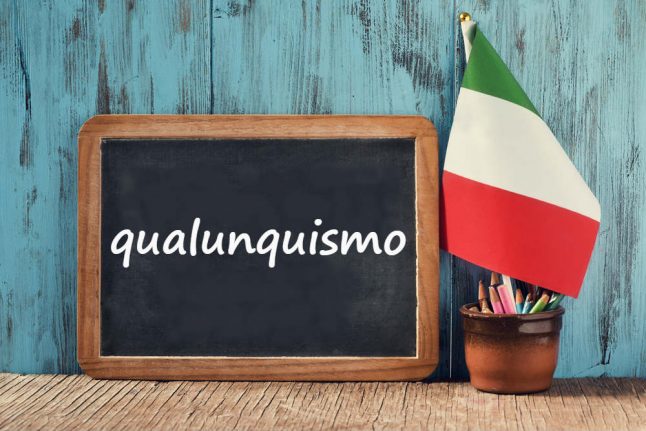 If you're past caring about the latest political goings-on, this word is for you.

As a pejorative, the word qualunque can be translated as “whatever”.

And the related noun qualunquismo means an attitude of distrust, scepticism, defeatism and apathy  – something like “whateverism” or “meh-ism”.

But it's not plain old indifference, because there's a heavy note of contempt.

That might explain why it's so often used in relation to politics.

Qualunquismo is a word for feeling fed up, when you've had it up to here, and can't stand the sight of something (usually politicans) for a minute longer.

It's the attitude of “they're all the same, so what's the point?” that so often stops people from voting in elections. It's sometimes translated as “everymanism”.

READ ALSO: Ten untranslatable words that only exist in Italian

While this word often pops up in writing about former Italian Prime minister Silvio Berlusconi, the word can be traced all the way back to 1946 and the right-wing populist, monarchist and anti-communist party, the Fronte dell'Uomo Qualunque (The Everyman's Front).

Formed just after the Second World War, the party apparently offered an “apolitical” alternative to both fascism and anti-fascism, at a time when Italians had heard more than enough about both.

This particular movement was short-lived, but it seems the attitude it embodied has lived on.

By extension, a person who feels a lot of qualunquismo is a qualunquista.

The word is a cousin of menefreghismo, a rather dark word that could be translated as “not-giving-a-damn-ism.”

Qualunquismo isn't a word you'll hear very often, but if you do find a reason to use it you'll no doubt impress your friends and surprise your Italian teacher.

If you care about that.