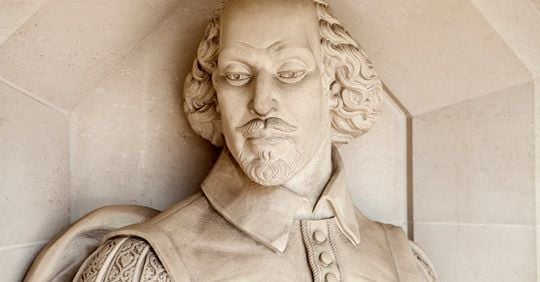 A statue of Shakespeare in London. Photo: Depositphotos.

The three historical researchers, Corrado Panzeri, Saul Gerevini and Giulia Harding, say Florio fled his howtown of Messina, Sicily, during the Inquisition, travelling to Verona and Venice before ending up in London.

There, they believe he stayed in a castle owned by Henry Wriothesley, the third Count of Southampon, and used the aristocrat's protection and his father's influence to work as an author and playwright. It might sound absurd to say that the master of the English language, who famously resided in (and is thought to have been born in) Stratford-upon Avon, England, was in fact an Italian all along. But these researchers are not the first to think so.

In 2002, Sicilian professor Martino Luvara published a book titled Shakespeare era italiano (Shakespeare was Italian) in which he identified the playwright as Messina-born Michelangelo Florio Crollalanza, who fled Italy for London and translated his surname into English – 'crollare' means 'to collapse' or 'to shake' and 'lanza' (lancia) means 'spear'.

Part of the evidence in support of this are some striking similarities between Crollalanza's work, including a play called Tanto traffico per Niente (Much Ado about Nothing), but most experts weren't convinced. Whether he was Italian or not, it's no secret that Shakespeare loved Italy. And his local knowledge of the country was remarkably accurate

A third of the Bard's plays were set wholly or partially in the country, and the mystery of how the author had such perfect knowledge of places like Messina, Venice, Verona and Padua has long fascinated historians.

The new programme, currently being made in Spain, also investigates whether or not Florio, or Shakespeare, had a chance meeting with the great Spanish writer Miguel de Cervantes in Messina.

One thing historians agree on is that Florio was the author of an English-Italian dictionary which gave the English language more than 200,000 new words – though many say credit for his work was not always given.