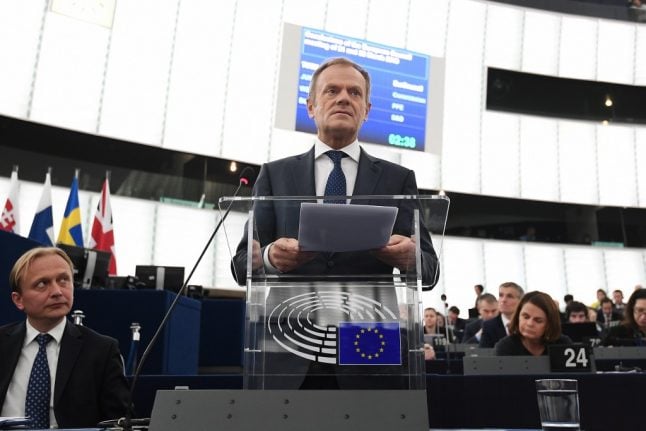 European Council President Donald Tusk during a debate last month in Strasbourg. Photo: FREDERICK FLORIN / AFP
EU leaders also reacted sceptically, saying that there had to be a strong justification for any further delay.
The competing visions of how to unwind Britain's 46-year EU membership will be hashed out again at a summit in Brussels on Wednesday.
Strong resistance is likely against May's plan, which would involve Britain planning for European elections on May 23 but then not actually holding them.
The current Brexit deadline of April 12 has already been pushed back once from March 29 because of the UK parliament's repeated failure to back the deal May signed with the other 27 EU leaders in December.
May's formal request to EU Council president Donald Tusk said Britain thinks the delay “should end on June 30 2019” — the same date she asked for and was refused at the last EU summit last month.
“If the parties are able to ratify (the withdrawal agreement by) this date, the government proposes that the period should be terminated earlier,” May wrote in a letter released by Downing Street.
A senior EU official said that Tusk's own idea for a “flexible” 12-month extension “will be presented to member states today [Friday, ed.]”.
But a source in French President Emmanuel Macron's office said it was “premature” to consider the request without “a clear plan” from May about what she intended to do with the extra time.
France's Europe Affairs Minister Amelie de Montchalin said: “Another extension requires that the UK puts forward a plan with a clear and credible political backing.
“In the absence of such a plan we would have to acknowledge that the UK chose to leave the EU in a disorderly manner,” she said.
German Foreign Minister Heiko Maas said May still had “many questions” to clarify.
Dutch Prime Minister Mark Rutte — seen as one of May's closer European allies — also said the letter “doesn't answer” important concerns.
'Political cover'
May said Britain would start preparing for European Parliament elections in case it is still a member of the bloc when they begin on May 23.   The idea is deeply unpopular with Britons who voted to quit the EU and chart their own future in a 2016 referendum whose arguments are still being waged to this day.
Political analysts in London said May probably knew that her new deadline will be rejected because EU leaders do not think she can get her deal through parliament any time soon. May is under intense pressure from the right wing of her Conservative Party to pull Britain out of the bloc as soon as possible — with or without a deal.
“I think that Theresa May is looking for political cover because she is asking for an extension she knows she can't get,” said King's College European politics professor Anand Menon.
She wants Brussels to “force her to do something else so that at least she won't get accused of selling out.”
'Fight to save Brexit'
Britain and the other 27 EU nations must give unanimous backing to any deadline extension. Some EU leaders fear that Britain's participation in the European Parliament vote will help boost the standing of anti-EU parties due to their popularity among Brexit-backing Britons.
UK far-right leader Nigel Farage called on his supporters Friday to vote for his Brexit Party in the European election.
“The fightback to save Brexit has begun,” Farage tweeted.
Breakthrough unlikely
May's team is currently negotiating with leaders from the main opposition Labour Party in a bid to find a compromise that can pass parliament in the coming days. But the talks do not appear to be going well.
“We are disappointed that the government has not offered real change or compromise,” a Labour Party spokesperson told reporters. “We urge the prime minister to come forward with genuine changes to her deal in an effort to find an alternative that can win support in parliament and bring the country together.”
May's letter said the talks' failure would likely see the two parties jointly produce several options that would be put up for a series of parliamentary votes.
Labour is pushing May to accept a much closer post-Brexit alliance with the bloc that includes its participation in a customs union. May had previously dismissed the idea because it bars Britain from striking its own trade deals with global giants such as China and the United States.
By AFP's Dmitry Zaks