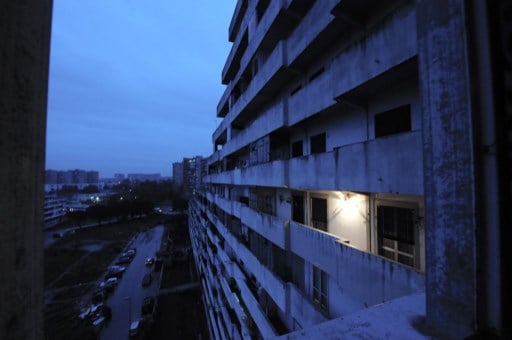 A shot of the famous Scampia housing complex at night. Photo: AFP

After years of planning, today Naples will go ahead with the long-awaited demolition of six of the notorious Scampia tower blocks, known as a major crime hotspot in the city.

Le vele, or “the sails”, is the name of the unusually-shaped concrete buildings that made up the complex in Scampia, on the outskirts of the city, thrown up in the 1970s to house some of the city's poorest people. They've been a national symbol of poverty and degradation since the 1980s, becoming notorious across Italy as a bastion of the ruthless Camorra organised crime group.

The “sails” were made famous worldwide by scenes filmed in the neighbourhood for the hit fiilm and TV series Gomorrah.

Based on the 2006 bestselling book by Naples-born writer Roberto Saviano, the show tells the story of the Neapolitan mafia and the influence it had on the area.

The concrete blocks, riddled with asbestos and divided by rubbish-strewn no-man's lands, have been a landmark on the city's northern edge for some fifty years.

Activists have been working to change the image of the district and its portrayal in the media, and things are said to have improved in recent years. But many in the city will still be glad to see the buildings torn down. Unusually, calls to demolish the buildings were led by the residents. Before the demolition began,  campaigners, alongside mayor of Naples Luigi de Magistris, unveiled a red banner which read: “The fight has been won, goodbye.”

The long-planned demolition is part of major plans to combat the city's problems with organised crime and poverty, Italian media reports.

Three of the initial seven buildings were destroyed between 1997 and 2003 after a local movement campaigned to get rid of them.

And over the coming months three more will be removed, leaving only one of the buildings as a “testimony to a negative past, now archived,” writes Il Sole 24 Ore, and to be used as offices by the local council.

The demolition will not be immediate. Instead of explosives, authorities have opted to use special demolition vehicles “equipped with pincers capable of shredding the structures.”

The redevelopment of the area is expected to include new roads, as well as parks and public services.