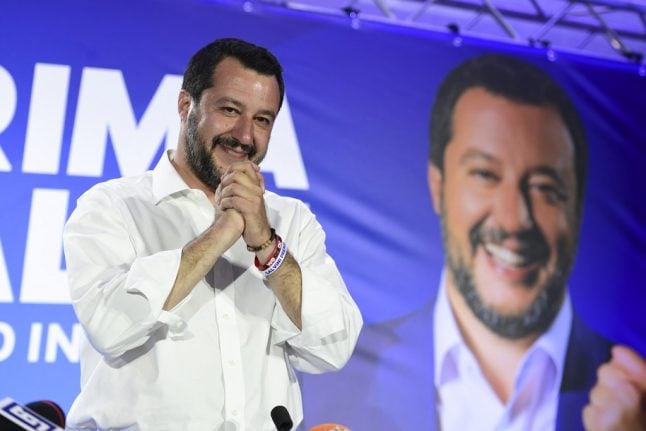 While exit polls put the party on 27-31 percent, by the time votes had been counted on Monday morning, the League's had reached 34.3 percent.

The second biggest party was its opposition, the centre-left Democrats (PD), who won 22.7 percent. The anti-establishment Five Star Movement (M5S), which governs in coalition with the League, took just 17.1 percent.

“One word: thank you Italy,” Salvini tweeted an hour and a half after polls closed on Sunday night, posting a photo of himself with the banner: “1st party in Italy THANK YOU”.

Salvini's allies on the right also had a good night: Forza Italia, the centre-right party founded by former prime minister Silvio Berlusconi, won 8.8 percent – less than in the last EU elections but enough to get its leader a seat – while the far-right Brothers of Italy increased its share to 6.5 percent.

No other parties secured the 4 percent minimum needed to get one of Italy's 73 seats in the European Parliament.

Turnout was 56.1 percent, down from 58.7 percent in the last European election in 2014, making Italy one of the few countries where voter engagement decreased.

While Salvini's approval ratings appeared to slip in the weeks leading up to the vote, the results show huge gains since EU elections five years ago, when the League won just over 6 percent. Until now its best ever result was Italy's general election of 2018, when the League won 17 percent and became one half of the country's coalition government.

But now the party has outperformed its senior coalition partner, commentators are speculating that Salvini could abandon their agreement and force an early election in a bid to take the upper hand.

“Salvini is the true leader of a dangerous government,” declared the head of the PD, Nicola Zingaretti, who may be encouraged to favour new elections after his party's better than expected result. “Now the government is even more fragile.”

“We're still the rudder of this government,” said the leader of the M5S Luigi Di Maio, who like Salvini serves as deputy prime minister. Blaming his party's showing on low turnout in the south of Italy, he promised to focus more efforts on Italy's regions.

The League is expected to take around 28 or 29 MEPs to Brussels, putting it on a par with the UK's Brexit party and the Union parties in Germany.

The PD will have up to 19 seats, M5S 16, Forza Italia eight and Brothers of Italy six.