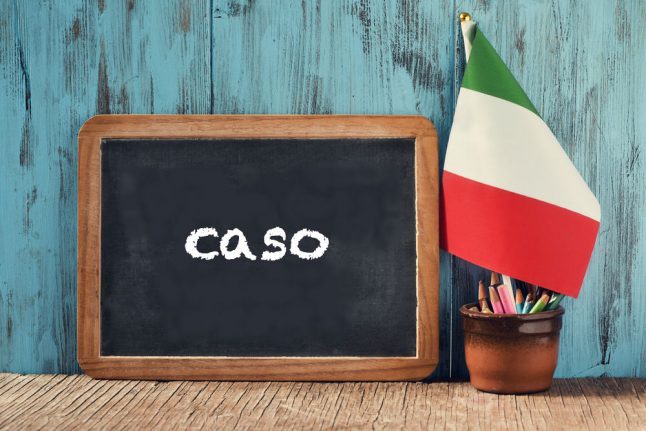 Well, yes and no. Caso can indeed be translated that way, and it turns up in many of the same expressions that feature 'case' in English. Like our version, caso can refer to an instance, event or set of circumstances – real or imagined.

Ti do il mio numero di telefono, nel caso che tu venga a Roma.
I'll give you my phone number, in case you come to Rome.
(NB: note the subjunctive in the second clause, because it's hypothetical.)

In ogni caso non ci perdi niente.
In any case, you've got nothing to lose.

In tal caso dovremo rimandare la partenza.
In that case we'll have to put off our departure.

But there are plenty of ways you can use caso where 'case' wouldn't fit in English. Notably, it's another word for 'chance' or 'fate'.

Il caso ci ha fatto incontrare.
It was fate that we should meet.

A very useful expression you'll want to remember is per caso, which means 'by chance'. Just be careful not to mix it up with a caso, which is 'at random'.

Ci siamo rivisti per caso.
We met again by chance.

Per caso, avresti dieci euro da darmi?
Could you spare me ten euros, by any chance?

Scelgono i nomi a caso.
They pick the names at random.

Where it all starts to get a bit funky is when caso turns into something like 'need'. I explain this use to myself as something being right (or wrong) for a certain case, or scenario. If it matches the circumstances, it's appropriate or right; if it doesn't it's the opposite.

Forse sarebbe il caso di andarcene.
Perhaps we should go (or: perhaps it's right to go).

This use gives us the expression fare a caso, which means 'to be just right', 'to fit the bill' or 'be just what you need'.

Questa macchina fa al caso mio.
This car is just right for me (or: it's made for my circumstances).

Careful, though: there's another lookalike idiom that means something totally different. Switch the word order and you get fare caso a, which means 'to pay attention to' or 'notice'.

With that one I never have managed to see the logic. But you can always chalk it up to caso – pure chance.

I'll leave you with one final use of caso: there's a somewhat tragic expression in modern Italian, un caso umano or 'human case', that we'd probably translate as 'charity case' – i.e., a person you feel sorry for. And usually not in a good way.